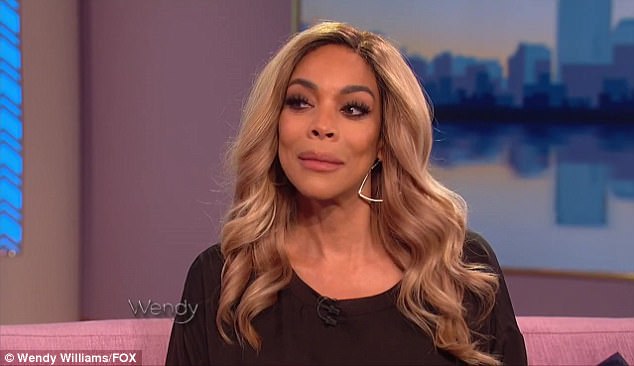 Of course, we’re talking about the incendiary report published by the DailyMail that accuses her husband of almost 20 years, Kevin Hunter, of leading a “secret double life” of being married to her and also supporting and living with a mistress.

The report says Hunter’s alleged affair with the other woman, Sharina Hudson, has been going on for more than a decade. The report also alleged Hunter spends his time between a house with Williams and another with his alleged mistress.

In response to the claims, as we reported earlier, the 53-year-old Emmy nominee’s spokesperson, Ronn Torossian, said in a statement:

“One plus one does not equal three. This woman is a friend but there is no ‘there’ there.”

Obviously, this is an issue Williams can hardly afford to ignore, so she addressed the rumors head-on Tuesday morning from her hosting chair.

“It’s weird doing Hot Topics and being a hot topic,” she began following supportive applause from her audience. “It’s some sort of weird story going around the Internet regarding my husband.”

Without giving the story too much attention, she continued:

“You can believe what you want, but…” and then held up her left hand to show her wedding ring.

“I stand by my guy,” she declared. “We commuted this morning.”

“All is well in Hunterville,” Williams assured. “Don’t believe the hype and if there was hype, believe me, you—I would let you know.”

As she concluded the personal portion, Williams quipped:

“I’ll be following this story, so I guess I’ll have to watch to find out what happens.”

And with that, as far as Wendy is concerned, the issue is closed or is it? Like Wendy said, folks will be watching to see what happens.

And speaking of watching to see what happens, if we were one Kevin Hunter, we’d be feeling a tad paranoid right about now ’cause there’s no doubt that somebody’s watching him.