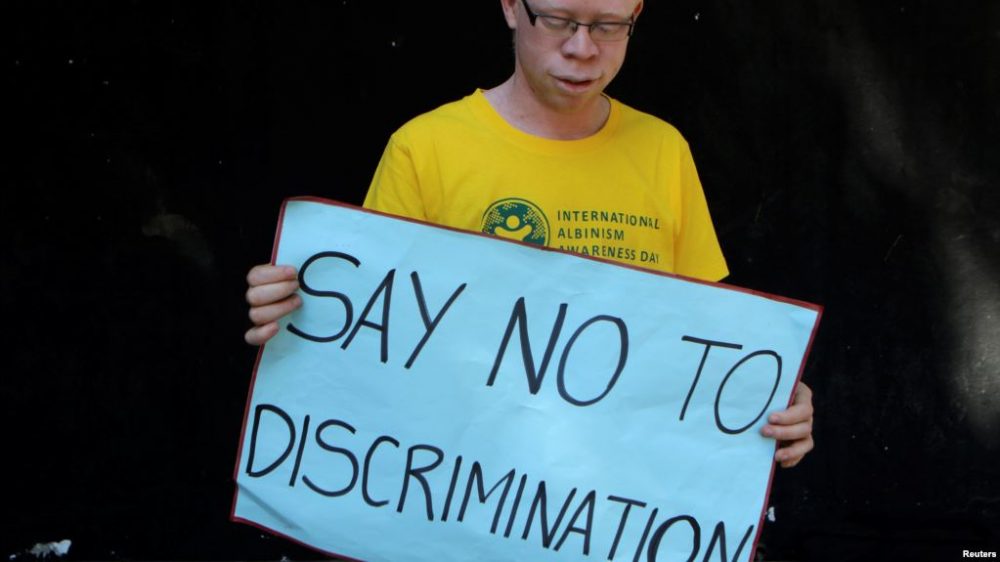 “When I was sleeping in my house, four people came and started attacking me with machetes,” said Mariama Staford, an albino in Tanzania. “One of those four people was a neighbor, and he is the one who took the machete and was cutting my arms.”

Staford was 25 years old when she was attacked in 2008. She told VOA that her neighbor first cut off her right arm and threw it to his accomplices. Then, “he chopped off my left arm.”

“I tried my best to struggle in order to defend myself,” she said, “but it was not successful and so they pulled me down in front of my son, who at that time was only two years old.”

She said it took seven hours before villagers carried her on a stretcher to a dispensary.

“When I reached there, the doctor who was on duty said that I should be returned home because I was already dead,” Staford said.  Two years ago, in an effort to counter such attacks, the Office of the High Commissioner for Human Rights appointed Ikponwosa Ero as the first U.N. independent expert on human rights of persons with albinism.

Ero, a Nigerian born, also has albinism — an inherited condition that affects the pigment of the skin and hair. She said attacks, mutilation and murders occur because of the false belief that albino body parts can bring wealth and good luck.

Bro said athat she has documented close to 800 cases of attacks against albinos in the past decade in sub-Saharan Africa, where such witchcraft-related violence is most common.

“Those are reported cases alone. Most cases are not reported because most cases involve family members or people known to the victim,” Ero said.

She said the practice thrives because there is a lot of money to be made. 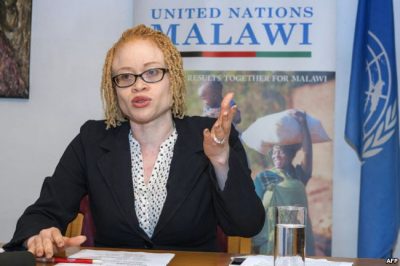 “The Red Cross reported that the body parts were valued on the black market. Like an arm was valued at $2,000, and a complete corpse at about $75,000. So, there are profits to be made even though you do not believe in witchcraft,” she said.

Though it is the witch doctors who drive this trade, they rarely are brought to justice. Ero said there were very few witch doctors among the prisoners she met during two visits last year to Malawi and Mozambique to assess the situation of people with albinism.

“And then the people on the high scale who are going to pay the money are usually not in jail because they are the elite. Who you find in jail are poor farmers, poor peddlers who are offered a lot of money.”

No one has paid for the crime committed against Mariama Staford.

“My case reached the trials, and the neighbor that I knew for 10 years was released,” she said. “The court said that because I have albinism, I have low vision, so I could not have recognized my neighbor chopping off my arms.”

Staford has suffered other repercussions, as well. When the attack occurred, she was six months pregnant. She lost her baby.

She told VOA she also must live with the suffering of her son who, as a two-year-old child, was forced to witness the horrific attack against his mother.

“It saddens me to know that, as a mother, I was unable to take care of him, just like a mother would do — even embrace him after the attack,” Staford said. “But also, he is a sad person and he always remembers what happened.”

Staford said there should be stringent laws against any person who attacks people with albinism. She also would like to see the government take away licenses to practice from witch doctors.

Staford and her son, who does not have albinism, as well as two siblings — who do have the condition — are living in protective custody in a safe house in Tanzania run by a branch of a Canadian-U.S. charitable organization called Under the Same Sun.

AfricaAlbino
Share
Subscribe to our newsletter
Sign up here to get the latest news, updates and special offers delivered directly to your inbox.
You can unsubscribe at any time