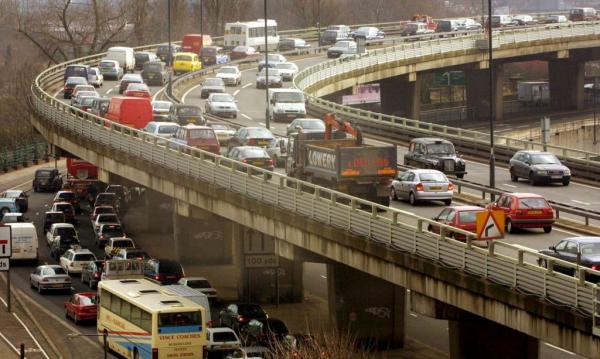 The quest for a greener economy demands unlikely sources of energy. How about traffic?

Researchers at Lancaster University in England are working to develop materials that can be incorporated into asphalt and convert the rumbling vibrations of passing vehicles into usable electricity.

The “piezolectric” ceramics developed by engineers could potentially generate more than 1 megawatt per hour under normal traffic conditions, which is about 200 to 300 cars per hour.

The stored electricity could be used to power street lamps, which could save taxpayers money.

“We will be developing new materials to take advantage of the piezoelectric effect where passing vehicles cause stress on the road surface, producing voltage,” Mohamed Saafi, a professor at Lancaster, said in a news release. “The materials will need to withstand high strengths, and provide a good balance between cost and the energy they produce.”

Cost savings could be used to fund upgrades for roads and other infrastructure projects.

“The system we develop will then convert this mechanical energy into electric energy to power things such as street lamps, traffic lights and electric car charging points,” added Saafi. “It could also be used to provide other smart street benefits, such as real-time traffic volume monitoring.”

Researchers at Lancaster are partnering with a variety of engineers and material scientists from throughout Europe on the project. Funding for the research has been provided by the European Union.

power
Share
Subscribe to our newsletter
Sign up here to get the latest news, updates and special offers delivered directly to your inbox.
You can unsubscribe at any time

May 16, 2022
Prev Next 1 of 2,045
Subscribe to our newsletter
Sign up here to get the latest news, updates and special offers delivered directly to your inbox.
You can unsubscribe at any time
More Stories
World News