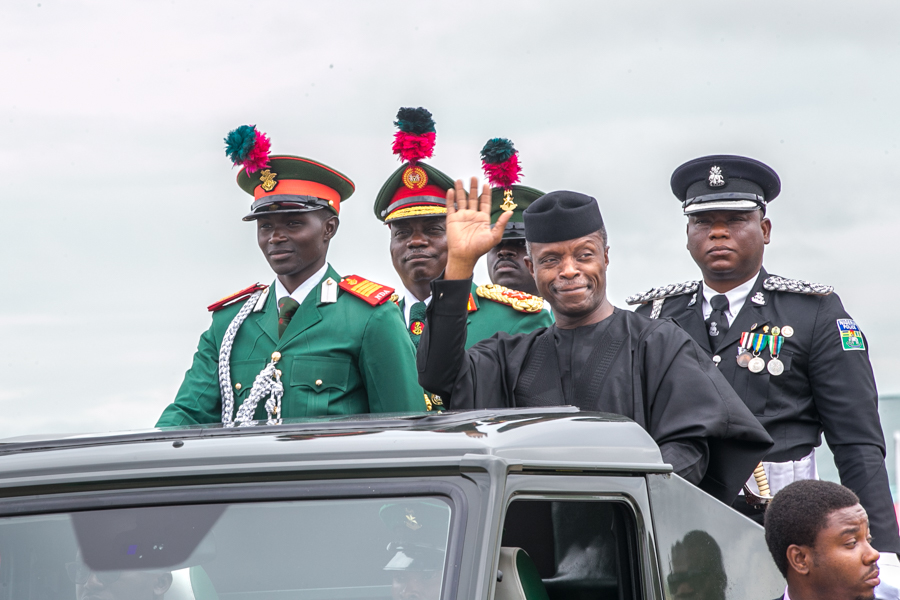 A year ago, the President himself was here for this purpose, and it is a great honour for me to be here today, on his behalf, to commemorate this important occasion with our Armed Forces. 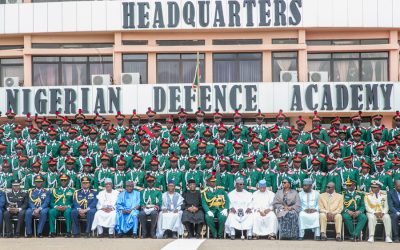 Today’s graduation parade marks another important milestone in the history of the Nigerian Defence Academy, as it carries out its mandate of producing competent, committed and patriotic officers who will take pride of place in various Services and formations of the Armed Forces.

The graduation is even more remarkable in the sense that it is a combined graduation, for the 64 Regular Course, 65 Regular Course of the Navy and Air Force, and the Short Service Course 44 of the Army respectively.

I am told that present among the cadets passing out today are 4 nationals of Togo and one from the Republic of Benin. This is a longstanding tradition; the NDA has over the years, in the spirit of African brotherhood and cooperation, trained cadets from various African countries: Liberia, Togo, Sierra Leone, Niger, Central African Republic, Zimbabwe, Uganda, Burkina Faso and Chad. 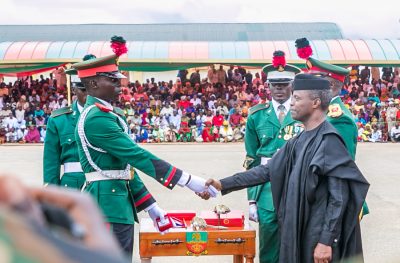 Let me specially commend you for the spectacular parade this morning. The order, the synchronization, the precision, the creativity and the discipline exhibited were simply outstanding.

The world has changed a great deal in the time since today’s graduating classes enrolled into the NDA. The threats that confront us as a nation and as a planet have evolved and continue to evolve. Forty years ago, a speech like this would have been situated firmly within the context of the Cold War, with its well-defined ideologies, and distinct warring parties.

Today, we speak of non-state actors and of asymmetric warfare, and are confronted by enemies whose identities are as nebulous as their motivations.

It feels like yesterday when the earliest high-profile Boko Haram suicide bombings happened in Nigeria. It was a surreal moment, something that no one associated with Nigeria. It was not uncommon, at that time, to hear people argue that the perpetrators had to have been of foreign origin, as it was not in the nature or personality of Nigerians to be suicide bombers.

This was only about six years ago. In the time since then we have grown accustomed to suicide bombings and by Nigerians no less. The targets evolved rapidly, from symbols of authority like the Police Headquarters and the United Nations Building in Abuja, to encompass soft targets – bus stations, religious houses and markets. And again very quickly we started to see a trend of female suicide bombers.

It is worthy of note that until about 2013, the phenomenon of female suicide bombers was virtually unknown in the Boko Haram insurgency. A short four years later, it is one of the defining elements of the insurgency – young girls, some not even teenagers yet, laden with explosives and sent off as harbingers of death and destruction.

This swift evolution in suicide bombings is a perfect illustration of the nature of the threats that nations face today – unpredictable, asymmetric, constantly adapting to changing conditions, driven by a compulsive need to inflict maximum damage with minimal effort.

This is therefore the question we ought to be asking ourselves: are our Armed Forces evolving with a similar speed and urgency, are they adapting with a similar nimbleness? How do we evolve rules of engagement in asymmetric warfare situations? Should we be redefining the borders of the Geneva Convention in the light of military engagements with armed militant combatants? Can we observe the same human rights rules where suicide bombers and persons determined to die and take with them as many innocent lives as possible are the enemy we must confront? What are the borders of the right to privacy and freedom of expression on the internet? What is the responsibility of Nations of the world in policing the internet which has become a virtual training ground for much good and as much evil?

Some of the early analyses of yesterday’s bombing in a London tube suggest that tutorials for making the explosive devices used are available on the internet. How can the military get ahead of the curve on communications in the age of the fast, cheap and available communication for all? We must also answer the question of how to defeat the ideologies that promote mindless killings and anarchy.

But just as important as these issues around conflict are the issues around how the military can in the process of innovating or thinking through use science and technology to add real value to the society and nation it has sworn to defend.

Let me speak briefly about the relationship between the military and scientific innovation, and how both have historically shaped and influenced each other.

Centuries ago, inventions like the wheel, and gunpowder, forever changed the nature of war. National armies wasted little time taking advantage of these innovations in the endless battle to gain an edge over existing and emerging enemies.

In a similar manner, the military has also spearheaded technology and practices that civilians have latched on to, to alter human civilization as we know it. The one that comes to mind most readily is the Internet, originating from the 1960s Advanced Research Projects Agency Network (ARPANET) Project of the United States Department of Defense.

Five decades on, the Internet has turned out to be perhaps the most definitive invention in the history of mankind, creating unprecedented social, economic and political opportunity. The American military has also been credited with the invention of GPS- Global Positioning System (GPS) now so common that every smartphone and cars use it to ascertain location.

But this network of satellites was originally set up by the U.S. Department of Defense in the 1970s. President Ronald Reagan ordered GPS to be made available to civilians once it was completed, while President Bill Clinton later declared that the highest quality GPS signal should be available as well.

How about RADAR? (an acronym for Radio Detection and Ranging,) this system uses radio waves to find speed, altitude, range, and direction of moving objects such as planes, ground vehicles, missiles, etc. Radar was developed before World War II for military purposes.

Today, it’s used for a variety of purposes, both military and civilian, including air traffic control and weather forecasting. (Inadvertently, it was discovered that microwaves transmitted from radar equipment during WWII could also cook food, which led to the post-war creation of the microwave oven.)

The use of Unmanned Aerial devices or drones today for surveillance, photography (and in Rwanda), the delivery of blood to rural medical facilities originated from the development of the devices by the military in the early 20th Century.

The world I have just described is the one that today’s cadets are graduating into. Placed side-by-side with this contemporary context, the Cold War Era into which your predecessors – today’s Generals and Commanding Officers – graduated, almost feels like a model of orderliness and predictability.

At this point let me say that I am pleased to note that the NDA has been positioning itself as a hub for innovation. I am already aware of inventions such as an Automated Pop-Up Target System, a Multi-Purpose Combat Mobile Robot, and a Perimeter Surveillance Robot, which the NDA has showcased at various science and technology exhibitions in the recent past. This is laudable and I urge you to sustain the culture.

I would also like to urge you to collaborate more extensively with the private sector, for research and innovation. All around the country technology hubs are springing up that are attracting our Nigeria’s brightest talent, and breaking new technological ground. I am convinced that the military should make its presence felt in this area.

Let me of course also commend the management of the NDA for your efforts so far in adapting your curriculum and programmes to contemporary realities. I have been told of the recent paradigm shift in the Academy’s training calendar, such that Naval and Air Force cadets now spend only four years in the Academy and then move to their respective bases, in place of the old system that saw them spend all five years in the Academy. Allowing them to spend their final year within their respective bases is a clear indication of the commitment to producing better-trained and better-prepared Naval and Air Force graduates.

To the graduating students of today, I have this charge: You belong to a special breed of young Nigerians. You model the highest form of patriotism and love of country because as armed forces personnel you have sworn to defend this nation with your lives. Besides you have come from every state, every ethnic group and you belong to different faiths yet by living together, rigorous training , drills and studying together you have formed bonds which make you brothers and sisters, ready to confront any situation even life-threatening situations shoulder to shoulder. This is the type of nation that we want to build.

In turn the nation has offered you its best in training and will continue to do so. You have an obligation to commit yourself to the never-ending task of nation-building, especially at a time like this when our country is urgently in need of peace, unity and cohesion.

As you join your senior colleagues in the field, you will be obligated to contribute your own quota to the defence of your fatherland. With the world-class training you have received in the Academy, I am convinced that you will discharge your duties professionally and responsibly, and that, in your hands, the future holds great promise for our national defence and security.

I commend once again our men and women in the Armed Forces who have kept faith with the current democratic dispensation for the past eighteen years. The subordination of the military to civil authority has been a cherished age-long practice that has promoted military professionalism in all parts of the world. It is a tradition that must be sustained and strengthened in our country.

To achieve this, all our men and women in uniform must continually re-dedicate themselves to the oath they have sworn, to subject themselves to democratic and constituted authority. I enjoin you to continue to shun politics and politicking. You must stay focused, and remain loyal to your Commander-in-Chief and to his government at all times.

As I close, let me congratulate the Commandant and the entire community of the Academy for the incredible job you are doing here. I commend your ability to innovatively combine military training with conventional academic studies for the cadets here, as well as offer postgraduate studies for military officers and civilians, in line with the practice in the best military academies across the globe.

I would like to thank the parents and guardians of these young men and women for permitting them the opportunity to enrol in the military, and for the support they’ve given over the years. I pray that God will reward the sacrifices you have made for your children and wards. And I wish you all journey mercies as you return to your various homes.

I thank you all for listening. Long live the Federal Republic of Nigeria.