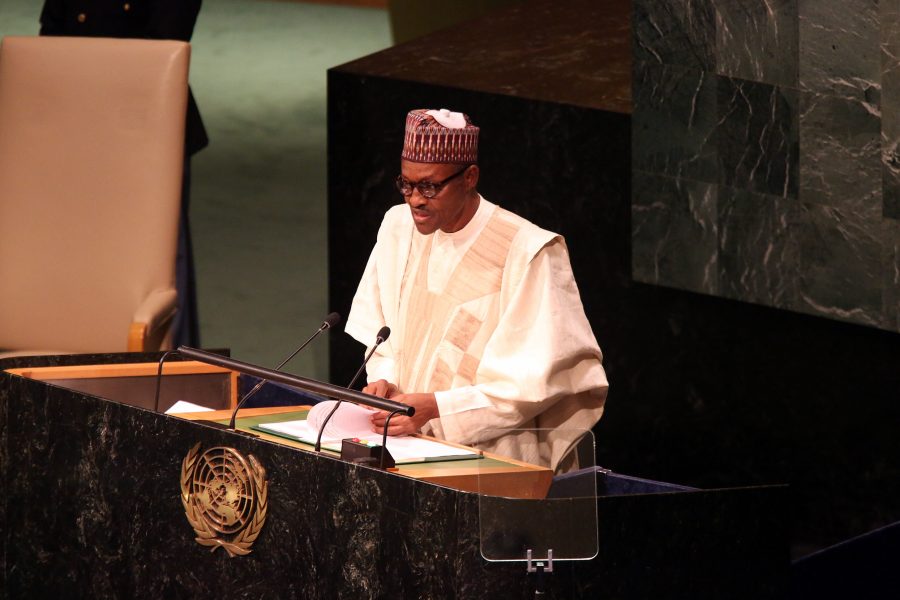 [dropcap]P[/dropcap]resident Muhammadu Buhari will on Sunday depart Abuja for New York, amid angry protests, skirmishes, tension and confusion over the deployment of soldiers to the South-East.

Buhari will join other world leaders at the 72nd Session of the United Nations General Assembly (UNGA 72), according to the Presidency. Equally, the Nigerian leader will hold a lunch meeting with President Donald Trump of the United States of America, along with other world leaders. The President will be accompanied by the governors of Zamfara, Ebonyi and Ondo States, and key cabinet ministers.

President Buhari will transit through London on his way back to the country, said the statement Friday.

Images and videos on social media have shown soldiers’ inhumane treatment of local youth in the southeast and chasing after unarmed civilians in trucks. Inadvertently, the army’s actions have stoked increased tensions between southeast Igbos and the northerners. Historically, Igbos in the southeast have felt marginalized in Nigeria and president Buhari, did little to ease those sentiments soon after taking office when he suggested he’d prioritize development in other regions where he won more votes.

Meanwhile, the Plateau State Government on Friday imposed a dusk-to-dawn curfew on Jos Metropolis following the unrest in the southeast.

The government, in a statement signed by Mr Emmanuel Nanle, Director of Press Affairs, said that the action was to avert a further breakdown of law and order.

It said that security personnel had been deployed to flash points to ensure compliance with the order, and advised miscreants to avoid a clash with the law.

The statement quoted Gov Simon Lalong as expressing shock and dismay over the sudden build up of tension in Jos, while warning that government would not allow disgruntled elements to disrupt the peace.

“I am surprised that some disgruntled elements claiming to be reacting to agitations by the Independent Peoples of Biafra in the South-East, decided to throw Jos metropolis into confusion. Let everyone be clear about this – we shall not allow it,” Lalong was quoted as saying.

For months, the revival of fifty year-old secessionist rhetoric for the creation of a “Biafra” nation for the Igbo ethnic group has grown in popularity across the southeast. The secessionist calls have been mainly led by Nnamdi Kanu, the self-declared leader of the Indigenous People of Biafra (IPOB). Kanu, a British citizen who started his protests from London, was previously known only by his dedicated followers in the region. But he became well-known nationwide after he was arrested and detained for 19 months by the government on charges of treason. He was released on bail back in April.

In its bid to solve a growing regional crisis, the federal government may have made it worse, again, said Igbo leaders who spoke to Per Second News.

UN
Share
Subscribe to our newsletter
Sign up here to get the latest news, updates and special offers delivered directly to your inbox.
You can unsubscribe at any time

North Korea threatens to ‘sink’ Japan and turn U.S. to ‘ashes and darkness’

The Day In Pictures: FG’s SUKUK Pre-Offer Road Show with Investors in Kaduna