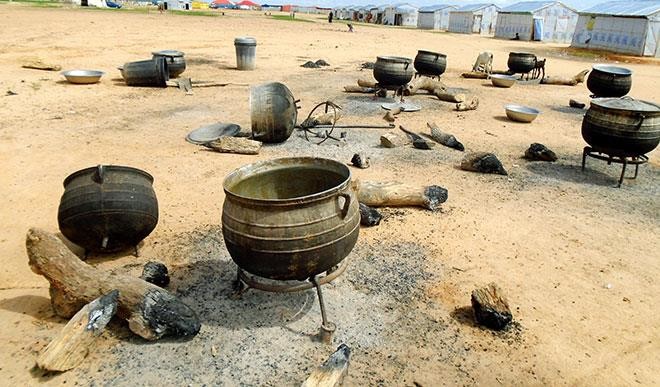 The number of people who need food aid in northeastern Nigeria has risen by 11 percent to 5.2 million in June from three months earlier, according to the Food and Agriculture Organization.

“The ongoing lean season is contributing to a deterioration in food insecurity in northeastern Nigeria, in the three most affected states,” according to a report by the United Nations agency.

The three worst-affected region include Borno, Adamawa and Yobe states.

FAO’s 2017 humanitarian plan for Nigeria has received $20.6 million in donations against a requirement of $62 million, to provide assistance to 1.9 million people, according to the report.

Dozens of children are dying of starvation in the camps spread across these three states. Refugees have staged regular protests for not having enough food and drinking water. There are also complains of food theft by the aid officers.

The hunger in the IDP camps are visible. Scenes of commotion and rowdiness during the distribution of food/relief materials are common. In Dalori and Bakassi camps, about the two biggest camps in Borno with over 22,000 and 21,000 IDPs respectively, children and adults who survived the Boko Haram onslaught could be seen struggling to get their next food rations.

The situation in camps outside Maiduguri, such as those in Bama and Dikwa, is more pathetic as the displaced persons have nowhere to go and beg.

The Day in Pictures: Buhari, Akufo-Addo at the Villa

You might also like More from PSN
Crime
<a title="Murder by lethal injection: Guilt-racked 82-year-old monarch with 12 wives, 60 children keeps a date with hangman" style="background-image: url(https://persecondnews.com/wp-content/uploads/2022/06/court-of-appeal-1-1-210x1