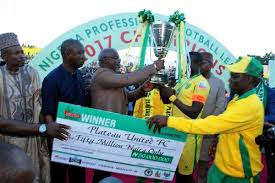 [dropcap]P[/dropcap]lateau United won the 2017 Nigerian Professional League championship for the first time, beating defending champions Rangers International 2-0 on the last day, to clinch the coveted trophy and cash of N50million.

They are the 19th different champions of the competition. And the victory is significant as they were promoted into the premier league this year.

Shooting Stars, ABS FC, Gombe United and Remo Stars have been relegated from the premier league.