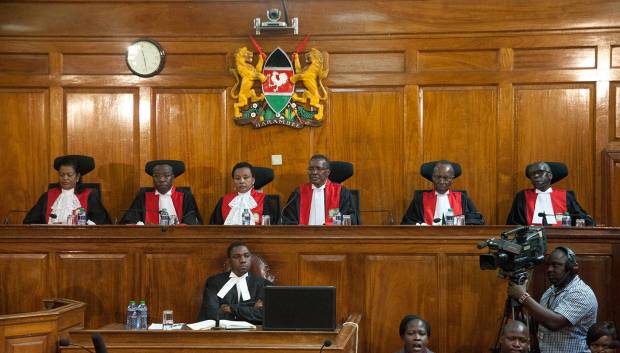 Kenya’s Supreme Court has nullified President Uhuru Kenyatta’s election win last month and called for new elections within 60 days, shocking a country that had been braced for further protests by opposition supporters.
No Kenya presidential election has ever been nullified.

The six-judge bench ruled Friday 4-2 in favour of the petition filed by opposition candidate Raila Odinga.

He has claimed that the electronic voting results were hacked into and manipulated in favor of Kenyatta, who had won a second term with 54 percent of the vote.

The court said the August 8 election was not conducted with accordance with the constitution.

The court did not place any blame on Kenyatta or his party. Odinga’s lawyer had asked the court to invalidate Kenyatta’s win, saying a scrutiny of the forms used to tally the votes had anomalies that affected nearly 5 million votes.
Kenya’s electoral commission had said there was a hacking attempt but it failed.
International election observers had said they saw no interference with the vote.
Odinga, a longtime opposition candidate and the son of Kenya’s first vice president, had unsuccessfully challenged the results of the 2013 vote.

CourtElectionsKenya
Share
Subscribe to our newsletter
Sign up here to get the latest news, updates and special offers delivered directly to your inbox.
You can unsubscribe at any time