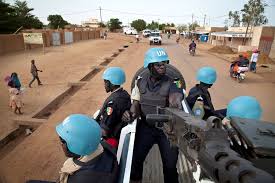 Gunmen attacked two United Nations bases in Mali on Monday, killing a peacekeeper, a contractor and seven Malians, the UN said, in the latest attacks on its presence in the country.

The peacekeeper and a Malian soldier were killed in an attack in the early morning in Douentza, in the central region of Mopti, according to a statement from the UN mission in the country, known by the acronym MINUSMA.

Hours later, six men toting guns and grenades drove up to the entrance of the UN mission’s camp in Timbuktu in northwestern Mali, the UN announced in a separate statement.

They opened fire on Malian UN security guards, killing five of them, as well as a policeman and a civilian contractor whose nationality was not specified, the UN said in a separate statement.

A UN source told AFP six guards had been killed, but the statement said one was wounded but had not died.