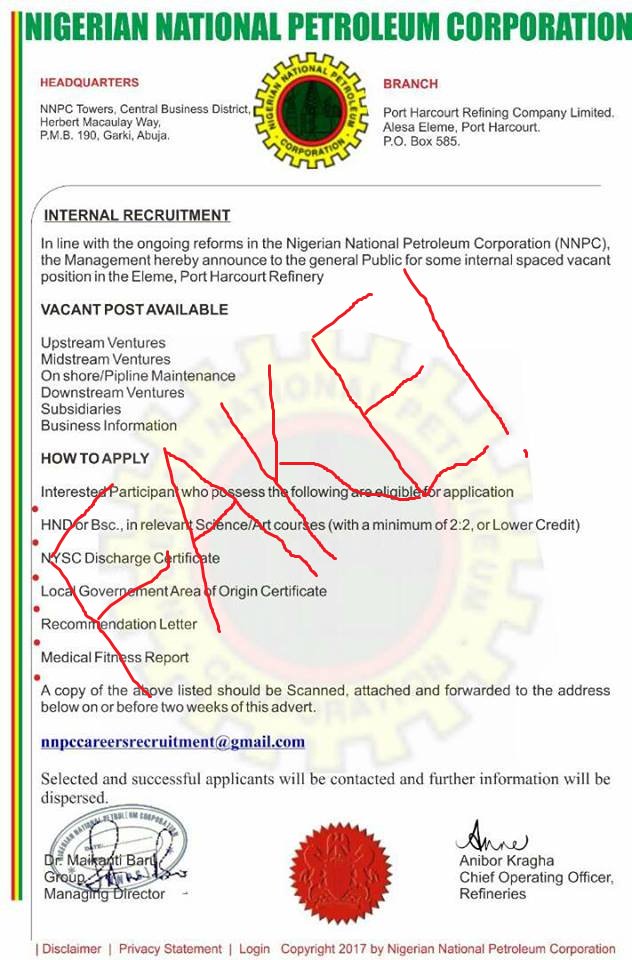 The Nigerian National Petroleum Corporation has warned members of the public that the corporation was not undertaking any recruitment, hence they should be wary of fraudsters.

The Nigerian National Petroleum Corporation (NNPC) has, for the umpteenth time, reiterated that it has not launched a recruitment campaign of any kind for now, said Corporation’s spokesman, Mr. Ndu Ughamadu, in a statement obtained by Per Second News.

The latest clarification is coming on the heels of a fresh recruitment advert purportedly from the Corporation being circulated by e-mails and on various social media platforms.

NNPC disclosed that the advert which is on a fake letterhead complete with NNPC logo is purportedly signed by the Group Managing Director, Dr. Maikanti Baru, and the Chief Operating Officer, Refineries, Mr. Anibor Kragha, and directs unsuspecting applicants to send their applications to a fake e-mail address: nnpccareersrecruitment@gmail.com.

Shedding more light on the scam, Mr. Ughamadu said another form of the scam involved text messages, e-mails, and letters inviting gullible job seekers for fake job interviews at the NNPC Towers and other locations across the country with a view to extorting money from them.

He called on members of the public, especially applicants, to discountenance any of such adverts or spurious invitations for job interviews as the Corporation was currently not recruiting, stressing that anyone who entertains such invitations does so at his or her own risk.

Mr. Ughamadu advised that anyone contacted for the purpose of the fake recruitment should not hesitate to report such invitations to relevant law enforcement agencies, adding that the Corporation would continue to engage security agencies on the scam.

He said NNPC Management under the leadership of Dr. Maikanti Baru would sustain the prevailing culture of transparency and accountability which has witnessed the conduct of open public bidding in sourcing for contractors and suppliers of goods and services for its day-to-day operations, including recruitment exercises, stressing that NNPC will advertise all vacant positions in national newspapers whenever it was ready to recruit.

NIGERIANSNNPCRECRUITMENTScam
Share
Subscribe to our newsletter
Sign up here to get the latest news, updates and special offers delivered directly to your inbox.
You can unsubscribe at any time

How Over N11 Trillion For Electricity was Squandered Under OBJ, Yar’Adua, Jonathan