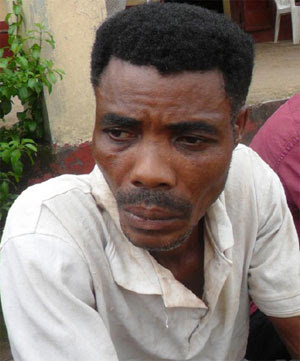 Apparently ravaged by the current economic hardship, 52-year-old Abraham Udoh, has sold off his two-year-old son for N150,000 in Calabar, Nigeria.

Udoh bargained and put a value on his son without the consent of his wife, Esther, and sold him off, according to PerSecondNews investigation.

reported the matter to the police, noting that Udoh sold the child without the consent of the wife.

Angered by the mindless and wicked act, the mother of the child, who carried the pregnancy for nine months, Esther, reported her husband to the police that he sold their son without her consent.

Meanwhile, Police in Cross River State have nabbed Udoh and others for alleged child trafficking.

Parading them in Calabar, Police Commissioner Hafiz Inuwa, said the suspect (Udoh) was arrested on July 24 shortly after he sold his son to an unknown woman residing in Uyo, the capital of Akwa Ibom State.

“On July 24, a case of child trafficking was reported at our Uwanse Divisional Headquarters here in Calabar.

“Upon investigation, Udoh confessed that he sold the child for N150,000 to an unknown woman in Uyo.

“When he was arrested, N130,000 was recovered from him and registered as an exhibit; iInvestigation is in progress to arrest the buyer and recover the child and charge them to court.”

According to the CP, Udoh said he sold the child because he needed some money and that he has six children.

He said 26 other suspects were arrested by the state command for various offences between June and July, 2017, five of them were robbery suspects, arrested on July 20, after they invaded the house of a woman, Angela Obo, in Calabar South.

Locally-made pistols, one revolver, three rounds of 9mm ammunition, three live cartridges, among others were recove