Priebus Out, Kelly In As White House Chief of Staff 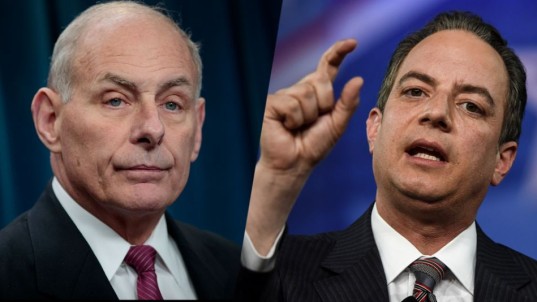 The dramatic move comes amidst a long-simmering feud between Priebus and new White House communications director Anthony Scaramucci, who lambasted him in an interview with The New Yorker this week.

“Reince is a good man,” he said at Andrews Air Force Base outside of Washington, D.C., after a trip to New York to talk about his push to end gang violence.

“John Kelly will do a fantastic job. Gen. Kelly has been a star, done an incredible job thus far, respected by everybody. He’s a great American,” he said.

Trump announced the decision on Twitter as his plane landed at Andrews.

Kelly will start on Monday, when there will be a Cabinet meeting, press secretary Sarah Huckabee Sanders told reporters at the White House.

Priebus on Friday had initially gotten into a van at Andrews with White House policy adviser Stephen Miller and White House social media director Dan Scavino on the tarmac, but shortly after the two men left the van and left Priebus alone, according to the White House pool.

The former chief of staff’s car then pulled out of the president’s motorcade and left while Trump remained on Air Force One.

The former Republican National Committee chairman’s dismissal marks the end to a tumultuous bid where he clashed with top advisors, most recently Scaramucci.

Priebus had initially tried to block Scaramucci from an earlier post in the White House. But last week, Trump appointed him to lead the White House press shop over objections from Priebus and then-White House Press Secretary Sean Spicer.

Spicer resigned as a result of that hire.

Scaramucci had initially tried to dismiss any reports of a soured relationship with Priebus, but that facade crumbled when The New Yorker published his profanity-filled screed against Priebus and other White House aides.

In that interview, he called Priebus a “f—ing paranoid schizophrenic,” intimated that Priebus had been leaking to reporters, and said that Priebus will be “asked to resign very shortly.”

This week has been tough on the White House even outside of that salacious interview, as Priebus’s departure comes less than a day after the Republican push to repeal ObamaCare collapsed in the Senate early Friday morning.

KellyPriebusU.S
Share
Subscribe to our newsletter
Sign up here to get the latest news, updates and special offers delivered directly to your inbox.
You can unsubscribe at any time