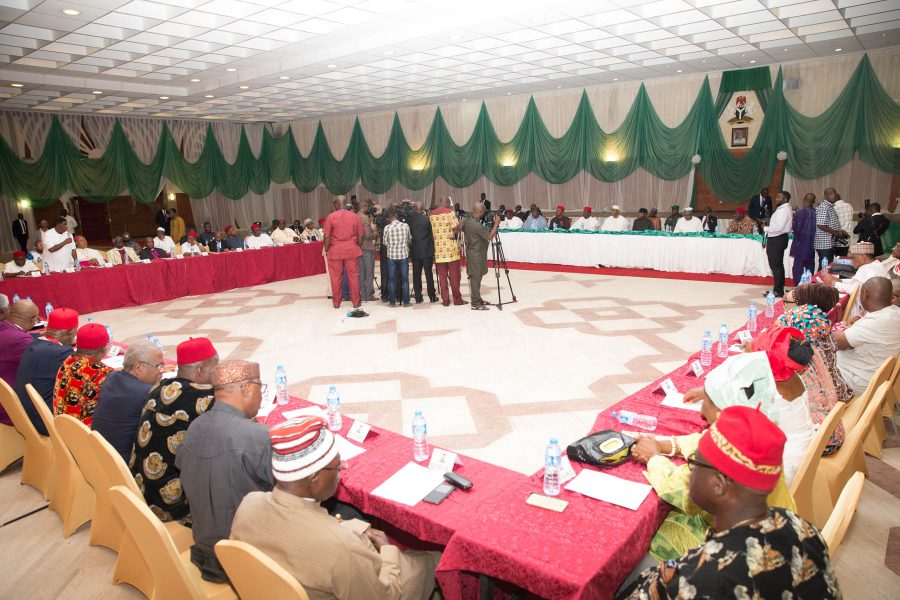 South East leaders have declined calls for a divided Nigeria following the outcome of an interactive forum of stakeholders. The leaders reiterated their commitment to a united Nigeria where peace, fairness and equality of opportunities are paramount to citizens irrespective of ethnicity or political affiliation.

“We are also in full support of the clamour for the restructure of the country and call on the Federal Government to start a dialogue with Nigerians on the modalities for achieving it,” said Chairman of the South East Governors’ Forum, Gov. Dave Umahi.

The Ebonyi state governor said that leaders from the zone condemn all manner of hate speeches from any segment of the country.

The leaders also threw their weight behind the call for full restructuring of the country on the platform of fairness and equity.

He said that they were in consultation with leaders from other parts of the country with a view to engaging the Federal Government in a meaningful dialogue.

He said that the region was in full support of the 2014 National Conference report and urged the Federal Government to set up structures for implementing same within a reasonable time.

Umahi appealed to the Federal Government to take steps that would ensure safety of the people of the area wherever they lived in the country “just as we have guaranteed the safety of those in our domain”.

With ethnic divisiveness that has reached such a pitch, the leaders dismissed fears that Nigeria may be pushed from the brink to chaos once again.

NAN further reports that the meeting which held at the Nike Lake Resort had all governors of the zone in attendance.

Other prominent leaders in attendance included, Sen. Enyinnaya Abaribe, Sen. Gil Nnaji, Sen. Chukwuka Utazi and several members of the House of Representatives from the zone.

Members of the clergy, traditional rulers and the leadership of Ohaneze Ndigbo was also represented.

DividedEastIPOBNigeriasouthUnity
Share
Subscribe to our newsletter
Sign up here to get the latest news, updates and special offers delivered directly to your inbox.
You can unsubscribe at any time