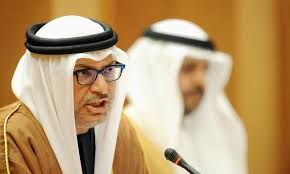 The Gulf has been hit by its biggest diplomatic crisis in years after Arab nations cut ties with Qatar, accusing it of destabilizing the region with its support for Islamist terror groups.

In a series of tweets Friday Dr Anwar Mohammad Gargash, UAE Minister of State for Foreign Affairs, warned that Qatar and the other Gulf Cooperation Council (GCC) countries could part ways.

The countries have reportedly submitted a list of demands to Qatar in order to end the crisis.

However, the demands have been leaked out to the media, reportedly by Qatar, drawing sharp criticism.

“Qatar leaking demands and concerns of its neighbours and Egypt are either an attempt to undermine serious mediation or are yet another sign of callous policy,” Gargash tweeted in English.

“The leakage will further exasperate and prolong the Qatar crisis. Undermining serious diplomacy will lead to parting of ways.”

In tweets in Arabic, he said that the Qatari leakage was “a teenager move that we are used to seeing in the brother.”

“It would have been wiser to deal seriously with the demands and concerns of the neighbours. Otherwise, a divorce is bound to happen.”

Gargash has been using the term “brother” in his tweets to refer to Qatar.

“The options for the brother are clear: Does he opt for his surroundings, stability and prosperity or will he choose mirage and duality and isolate himself from his surroundings? Perhaps the solution is in the separation of paths?”

Gargash in another tweet insisted that the crisis was real, but Qatar’s behaviour and confused management of the situation were compounding the situation and could lead to Qatar left out of the Gulf alliance set up in 1981.

Since its establishment, no new members joined and no founding members left or were kicked out.

“The security of the region is at stake. Clarity is the best option for all of us and divorce is sometimes a choice,” Gargash said.

“The brother must realize that the solution to his crisis is not in Tehran, Beirut or Ankara, or in the capitals of the West or in the media. The solution is that the neighbours resume their trust in him.”

Since Bahrain, Saudi Arabia and the UAE severed their diplomatic relations with Qatar on June 5 and closed their airspace, airports and seaports to planes and ships registered in Qatar, Doha has been seeking assistance from Iran, Turkey and other capitals and has been using international media to ease the pressure and blame the other countries.

However, Manama, Riyadh and Abu Dhabi have been inflexible in their demands to Qatar to change its attitudes and comply with the Riyadh Declaration that it signed in 2014 and which called for ending financial and media support for extremist and terrorist groups.