“The Federal Government scribe commended the phenomenal revenue generation drive of NPA as an important revenue earner for the government under the management of Bello Koko, adding that the exponential growth informed Buhari’s approval of salary increase for workers” 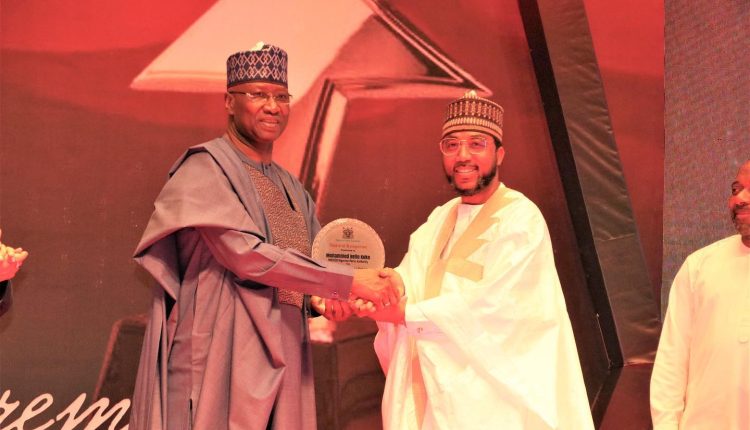 President Muhammadu Buhari was on Saturday in Lagos honoured and lauded by the workforce and the unions of the Nigerian Ports Authority (NPA) for a recent salary increase after 15 years stagnation, another feat by the Buhari administration.

Persecondnews reports that the Board and the management of NPA had called out workers for an impressive Long Service and Merit Award Ceremony held at Eko Hotels & Suites, Victoria Island, Lagos where the staff expressed appreciation to Buhari, the Secretary to the Government of the Federation, Mr Boss Mustapha, the Ministers of Transportation, Mu’azu Jaji Sambo and Prince Ademola Adegoroye.

Also extolled and honoured were by the workers were Labour and Productivity Minister, Dr Chris Ngige, the NPA Managing Director/CEO, Muhammed Bello Koko for their initiative and approval of the wage raise. 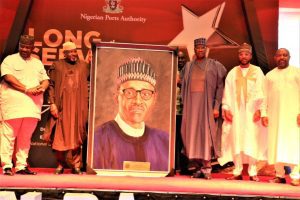 Lagos State Gov. Babajide Sanwo-Olu was represented at the event by the Commissioner for Transportation, Dr Frederick Oladeinde.

Speaking at the occasion, Mustapha, who was the chairman, congratulated the staff who were recognized for their exemplary services to the NPA and the nation. 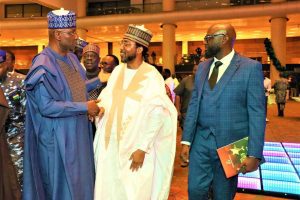 He said the maritime industry was crucial to the nation’s economy, pointing out that the Buhari administration’s contributions to the development of the sector had yielded great dividends.

The Federal Government scribe commended the phenomenal revenue generation drive of NPA as an important revenue earner for the government under the management of Bello Koko, adding that the exponential growth informed Buhari’s approval of salary increase for workers.

Click HERE to watch the welcome address of the MD, NPA, Mr Mohammed Bello Koko at the Long Service and Merit Awards Ceremony in Lagos

The NPA MD, Bello Koko, commended the SGF, the ministers for their efforts in securing President Buhari’s approval for breaking the 15-year salary stagnation.

He also thanked the workforce for their dedication and commitment to duty and service delivery towards making the NPA to realize its corporate goals. 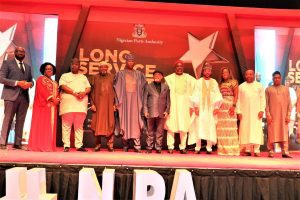 Bello-Koko said of the achievements of the Buhari administration was the securing of the International Standard Organisation (ISO) certification for Onne and Calabar ports in 2022.

Persecondnews recalls that the NPA boss had disclosed at the Presidential Villa, Abuja, while featuring in the 55th session of State House Briefing organised by the Presidential Communications Team in October 2022.

He said such certification would make ports operations more efficient, adding that the certification of other ports was in progress.

Transportation Minister Sambo hailed what he called the workers uncommon commitment to duty which he said should not go unrewarded.

Sambo, who said he served at NPA about 40 years ago, commended the management for its commitment to staff welfare. 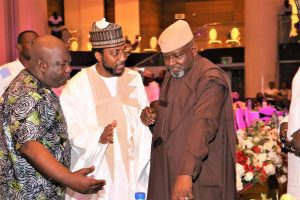 “I immediately acceded to the request for salary increase for staff because of the impressive growth in the revenue generation of the NPA under Mohammed Bello Koko,” the minister said.

In his speech, a one-time NPA MD, Chief Adebayo Sarumi, appreciated the recognition of past managing directors’ contribution to the building of the institution towards attaining its current level of growth.

He called on the minister to increase the pensions of retired staff of the Authority and lauded the current management and the Board for ensuring that the “labours of the past staff and managing directors are not in vain.”

Persecondnews also reports that the highpoint of the occasion, anchored by Frank Edoho, the TV host of “Who wants to be a millionaire”, was the cutting of cake by the management, past MDs and representatives of the awardees.

Managing Director of NPA Mr Mohammed Bello-KokoNigerian Ports Authority (NPA)
Share
Subscribe to our newsletter
Sign up here to get the latest news, updates and special offers delivered directly to your inbox.
You can unsubscribe at any time

The Day in Pictures: Glitz and Glamor at the NPA Long Service and Merit Awards at Eko Hotel and Suites, Lagos