......after the fresh deliberations only Tinubu, Osinbanjo and Amaechi made the new list. 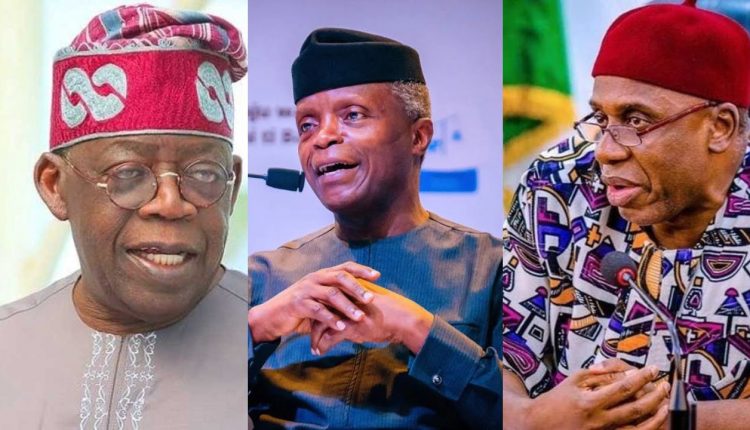 After another round of deliberation among the All Progressives Congress (APC) governors, the list of proposed presidential aspirants of the party has been further reduced to three.

Persecondnews had earlier reported that following intense consultations and deliberations as directed by President Muhammadu Buhari, the APC governors and the party’s National Working Committee (NWC), in the early hours of Tuesday had pruned the number of presidential aspirants for today’s primary to five.

However, after the fresh deliberations only Tinubu, Osinbajo and Amaechi made the new list.

Meanwhile, a former Governor of Kano State and Chairman, the Progressive Project (TPP), an umbrella organization for all pro-Osinbajo support groups, Senator Kabiru Gaya, has hinted that Osinbajo and Tinubu are the last men standing for the APC presidential primary.

Gaya, who disclosed this in an interview with Channels TV, monitored by Persecondnews, said stakeholders of the party trimmed the list, leaving only Tinubu and Osinbajo in the race.

He, however, did not mention how and where the stakeholders arrived at the decision.

Ahmed Bola TinubuAPCAPC GovernorsNWCProf. Yemi OsinbajoRotimi Amaechi
Share
Subscribe to our newsletter
Sign up here to get the latest news, updates and special offers delivered directly to your inbox.
You can unsubscribe at any time