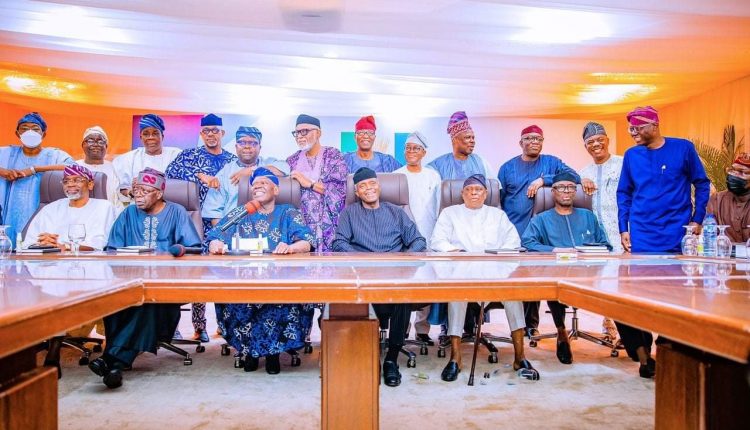 The Friday meeting called by the leaders of the All Progressives Congress (APC) in the Southwest has failed to agree on a concensus presidential aspirant for the zone ahead of the May 30 presidential primaries.

Persecondnews learnt that all the aspirants except Pastor Tunde Bakare (Ogun) and the Deputy Majority Leader of the Senate, Prof. Ajayi Boroffice (Ondo) attended the stakeholders meeting held at the State House, Marina, Lagos.

The issue of consensus aspirant was broached by one of the attendees who asked if some of the aspirants from the zone were prepared to step down to possible loss of the ticket.

However, none of the aspirants in attendance responded indicating none was ready to step down for the other, Persecondnews also gathered.

The meeting cautioned presidential aspirants from the zone against unguarded utterances and campaign of calumny.

Name calling and attacks on one another should not be employed by the aspirants and their supporters, it advised, while the aspirants to be ready to work with whoever emerges as the party’s candidate at the primary.

“The issue of betrayal was put to rest as the elders affirmed that everyone who desired to run for any political office whatsoever was not encumbered in any way at all.

“How do you ask someone who has paid N100m to step down? Step down for who? All the aspirants believe that they are popular and can win.

“Funnily enough, the issue of consensus was not listed in the agenda of the meeting. It was also not part of the text messages sent to us for the meeting.

“The meeting was majorly concerned about the utterances that are already portraying us as being divided and that the zone is behaving as if we have no leaders.

“Yet, there are concerns that the large number of aspirants could put the zone in danger if we go into the primary like that. But nobody was asked to step down for the other,” a source close to the meeting said.

He added:” Osinbajo, who is the highest ranking public officer from the region, was commended for a job well done as Vice-President.

“All the aspirants had the right to aspire to be the President, but enjoined them to exhibit the ‘Omoluabi’ ethos in their politicking.”

Speaking at the meeting, Chief Akande said the presidential aspirants were united that the presidency should come to the South-West region.

“We the APC are united and we will ensure that the presidency comes to our region, the South-West. We had a fruitful discussion at the meeting today (Friday).

“We had a fruitful discussion. We also resolved that everybody should maintain absolute decorum because we are united,” said former Osun governor.

APCPresidential AspirantsSouth West
Share
Subscribe to our newsletter
Sign up here to get the latest news, updates and special offers delivered directly to your inbox.
You can unsubscribe at any time