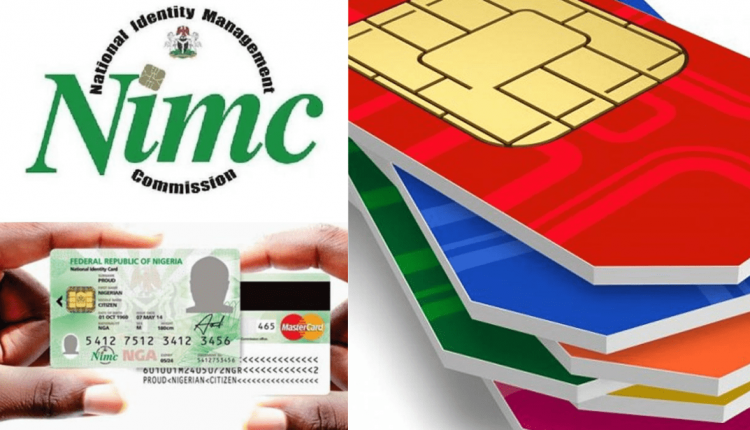 The Federal Government has directed telecommunication companies in Nigeria to bar all outgoing calls on unlinked lines as from Monday, April 4, 2022. It said NIN-SIM linkage had been extended several times to allow more Nigerians to freely comply with the policy, as it is a precondition for service in telecommunication companies, banks, Nigerian Immigration Service, and several other government agencies.

As a result of the government’s directive, the Nigerian Communications Commission (NCC) disclosed that at least 72.8 million subscribers risk being disconnected from telecoms services as data from the commission indicates that there are 197.8 million active telecoms subscribers in Nigeria as of February 2022.

The directive was announced in a statement jointly signed on Monday by the Director of Public Affairs at the Nigerian Communications Commission (NCC), Ikechukwu Adinde, and the Head of Corporate Communications at the National Identity Management Commission (NIMC), Mr Kayode Adegoke.

According to the statement, over 125 million SIMs have had their National Identification Numbers (NINs) submitted for linkage, verification, and authentication, and the National Identity Management Commission (NIMC) has issued over 78 million unique NINs to date.

“On behalf of the Federal Government, the Honourable Minister of Communications and Digital Economy, Professor Isa Ali Ibrahim Pantami, has commended Nigerians and legal residents for their support during the exercise to link the National Identification Number (NIN) to the Subscriber Identification Module (SIM).

“As of date, over 125 million SIMs have had their NINs submitted for immediate linkage, verification and authentication. Similarly, the National Identity Management Commission (NIMC) has issued over 78 million unique NINs to date.

“It would be recalled that President Muhammadu Buhari, GCFR, gave the directive for the implementation and commencement of the exercise in December 2020, as part of the administration’s security and social policies.

“The deadline for the NIN-SIM linkage has been extended on multiple occasions to allow Nigerians to freely comply with the policy.

“The FG also took into consideration the passionate appeals by several bodies – Association of Licensed Telecoms Operators of Nigeria (ALTON), civil societies, professional bodies, and a host of others – for the extension of the deadlines in the past.

“Accordingly, Mr President graciously approved the many requests to extend deadlines for the NIN-SIM linkage. At this point, however, the government has determined that the NIN-SIM Policy implementation can proceed, as machinery has already been put in place to ensure compliance by citizens and legal residents.”

“The implementation impacts on government’s strategic planning, particularly in the areas of security and socio-economic projections.

President Muhammadu Buhari has approved the implementation of the policy with effect from the 4th of April 2022.

“Consequently, the Federal Government has directed all telecoms to strictly enforce the policy on all SIMs issued (existing and new) in Nigeria.

“Outgoing calls will subsequently be barred for telephone lines that have not complied with the NIN-SIM linkage policy from the 4th of April 2022. Subscribers of such lines are hereby advised to link their SIMs to their NINs before the telcos can lift the restriction on their lines.

“Affected individuals are hereby advised to register for their NINs at designated centres and thereafter link the NINs to their SIMs through the channels provided by NIMC and the telecoms, including the NIMC mobile app,” it added.

banksNCCNigeria immigrationNIMCNIN-SIM linkageTelecommunications
Share
Subscribe to our newsletter
Sign up here to get the latest news, updates and special offers delivered directly to your inbox.
You can unsubscribe at any time

Farooq Kperogi: Lies may bloom but bear no fruit