..Court rules that their defection to APC from PDP on the platform they were elected was a breach of the electoral law 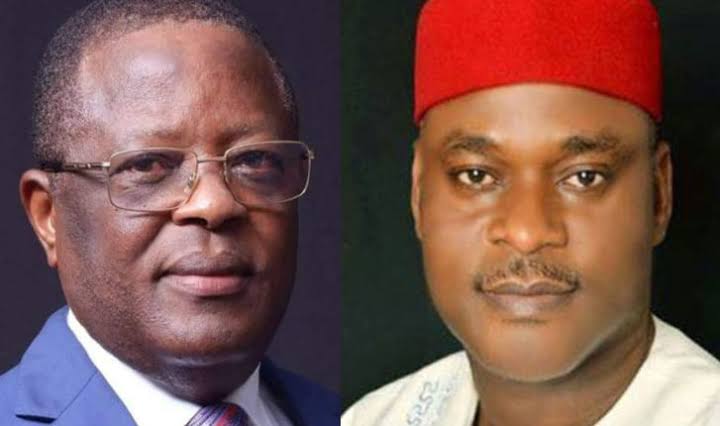 Following their defection from the People’s Democratic Party (PDP) to the All Progressives Party (APC), Governor David Umahi of Ebonyi State and his Deputy, Dr Eric Kelechi Igwe, have been ordered to vacate their seats and stop parading themselves as governor and deputy governor respectively.

A Federal High Court in Abuja on Tuesday held that going by the outcome of the 2019 governorship election, the office of the governor and deputy governor in Ebonyi “belong to the Plaintiff (PDP) and no other political party”.

Delivering his judgment, Justice Inyang Ekwo, held that the total number of 393, 042 votes Umahi secured during the March 9, 2019 governorship poll belonged to the PDP and the same could not be legally transferred to the APC.

“Having defected to the APC, both Umahi and his deputy, not only jettisoned the PDP, but also the votes that belonged to it.

“There is no constitutional provision that made the ballot transferrable from one party to the other,’’ Persecondnews quotes the judge as ruling.

The court also restrained both Umahi and Igwe from further parading themselves as governor or deputy governor of the state.

According to the court, the PDP is bound to retain the votes and the mandate given to the party by the electorate in Ebonyi, insisting that the position of the law is that both Umahi and his deputy could not validly transfer same to APC.

“Both Umahi and Igwe are to immediately vacate their positions while the Independent National Electoral Commission (INEC) to immediately receive from the PDP, names of persons to replace Umahi and his Deputy.

“Or in the alternative, conduct a fresh gubernatorial election in Ebonyi state in line with section 177(c) of the 1999 Constitution, as amended.’’

Persecondnews recalls that Umahi had on November 19, 2021 defected to APC at a grand rally at Abakaliki after months of speculation about his planned defection.

The PDP had gone to court to claim its mandate.

Dave UmahiEbonyi state
Share
Subscribe to our newsletter
Sign up here to get the latest news, updates and special offers delivered directly to your inbox.
You can unsubscribe at any time

Just In: Court removes 17 Ebonyi lawmakers over defection to APC