In Hartsfield-Jackson Atlanta International Airport alone, there were 450 firearms detected at airport checkpoints in 2021. 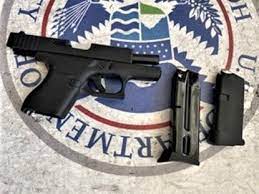 A gun accidentally went off after being discovered at an X-ray checkpoint at Hartsfield-Jackson Atlanta International Airport on Saturday, Persecondnews.com gathered.

The gun discharge occurred when a screening checkpoint employee was conducting a bag search “due to a prohibited item identified by the X-ray,” the TSA said.

“He advised the passenger not to touch the property, and as he opened the compartment containing the prohibited item, the passenger lunged into the bag and grabbed a firearm, at which point it discharged,” the TSA said.

Authorities searched for the owner of the gun who fled after his weapon fired. An arrest warrant was issued for the 42-year-old, named by police as Kenny Wells.

He was being sought on charges of carrying a concealed weapon at a commercial airport, possession of a firearm by a convicted felon, discharging a firearm and reckless conduct, Atlanta Police Major Reginald Moorman said.

Immediate fear that an active shooter had opened fire panicked the crowd, which rushed out of the terminal on to the tarmac.

Police said one person requested emergency medical help after experiencing a fall “in the atrium of the airport, which is not in the same area of the security check point, and two others complained of a shortness of breath”.

A record number of firearms were seized at US airport checkpoints in just the first nine months of 2021, the agency said.

Nationwide, the agency’s officers have stopped 4,495 airline passengers from carrying firearms on to their flights, surpassing the 4,432 firearms caught throughout 2019.

In Hartsfield-Jackson Atlanta International Airport alone, there were 450 firearms detected at airport checkpoints in 2021.

Hartsfield-Jackson Atlanta International Airport
Share
Subscribe to our newsletter
Sign up here to get the latest news, updates and special offers delivered directly to your inbox.
You can unsubscribe at any time

Verdict: Kyle Rittenhouse, not guilty on all counts – Jury