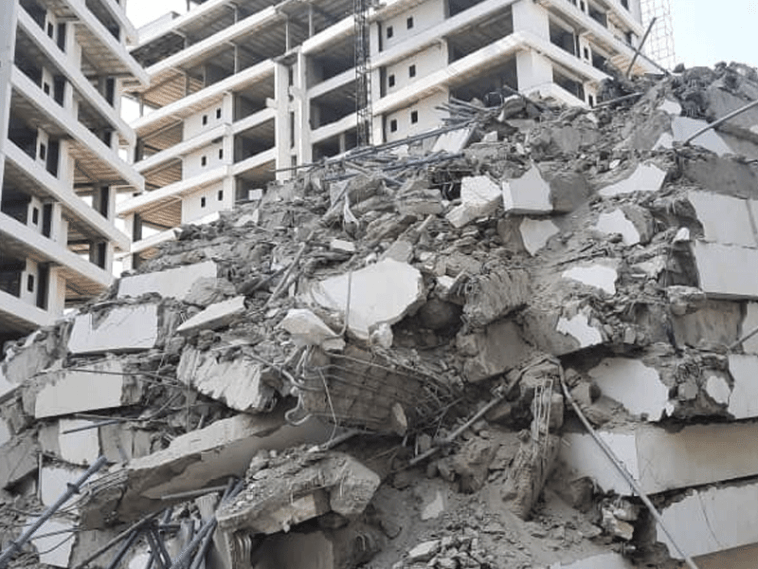 Ikoyi Skyscraper
By Ajuma Edwina Ameh
More than 45 people are still trapped in the rubbles of the collapsed 21-floor Ikoyi skyscraper, while four dead bodies have been recovered.
Rescue workers have also brought out five victims alive.
Persecondnews had reported that the  skyscraper still under construction, located on Gerard Road by Musliu junction in the highbrow area of Ikoyi, Lagos, collapsed about 2.10pm on Monday, trapping workers and the owner.
Persecondnews gathered that in the early hours of Tuesday, rescue team comprising the National Emergency Management Agency (NEMA), Lagos State Emergency Management Agency (LASEMA), Federal and State Fire Services, Police and Neighborhood Watch, were seen excavating the debris in search of possible survivors and bodies.
Families of the Ikoyi Skyscraper trapped victims have also stormed the area in the early hours of morning, praying and crying with the hope that their loved ones will be rescued alive.
Meanwhile, an official of NEMA, Mr Ibrahim, have disclosed that voices have been heard from under the rubbles of the collapsed Ikoyi Skyscraper building, adding that efforts are being made to rescue the people.
Ibrahim, who made the disclosure on national TV said; “Yesterday night we were able to recover another body. We now have five alive, four dead. We had a little break of about one to two hours. By the time we woke up, we were hearing voices underground and that is what we are now trying to do.
“The heavy weight on top, we want to bring them down to get to them. We have isolated their locations already and we are trying to get to them.”
Earlier, while reacting to the collapsed building, the General Manager, Lagos State Building Control Agency (LASBCA), Mr Gbolahan Oki, revealed that the owner of the 21-storey building, under construction was given approval to construct only 15 floors, but he went ahead to increase it to 21 floors.
He further revealed that the materials used for the Ikoyi Skyscraper building were substandard, adding that the owner of the property has been arrested and would face the law.
“He got an approval for a 15-storey building and he exceeded his limit. I am on ground here and the materials he used are so inferior and terrible.
“The materials he used, the reinforcement, are so terrible,” Oki said.
However, In a petition dated November 2, 2021, to Lagos State Governor Babajide Sanwo-Olu, a legal practitioner and member, Body of Benchers, Mr Kunle Uthman, blamed government for the unfortunate incident.
The petition reads in part: “In explaining this gory incident, the General Manager Lagos State Building Control Agency said that the approval for the collapsed building was fifteen (15) and not 21 floors, and admitted that  poor materials were used in construction of that building, hence its collapse.
“This incident is an example of culpability of government officials and its supervisory agency and failure to perform their duties and responsibilities or enforcement of punitive measures in respect of a recalcitrant contractor and owners of private properties.
“Necessarily, it would have taken appreciable time to construct the 6 additional floors, but the Agency responsible to issue stop work order and mark the building itself for demolition chose to ignore the construction of those additional floors and therefore failed in enforcement of extant laws.
“Why was a “Stop Order” not placed on this building and why was there no supervision of quality of materials as explicitly stated in several building control laws and legislation in the State.
“In this particular instance, which has resulted in fatality and deaths, the officials of the Lagos State Government responsible, especially the Lagos State Building Control Agency are culpable and should be prosecuted immediately, forthwith and without delay.”

Meanwhile, the Lagos State Government is setting up an independent panel to probe the collapse of the 21-storey building on Gerrard Road, Ikoyi. Members of the panel will be drawn from the Nigeria Institute of Architects (NIA), Nigerian Institute of Town Planners (NITP), Nigeria Society of Engineers (NSE) and other professional bodies.

It will independently investigate the remote and immediate causes of the incident and make recommendations on how to prevent future occurrence. The investigation is not part of the internal probe already being conducted by the government.
Governor Babajide Sanwo-Olu has said the government will surely find out what went wrong and punish those indicted.  The Governor, as a first step, has directed that the General Manager of the Lagos State Building Control Agency (LASBCA), Mr. Gbolahan Oki, an architect, be suspended from work immediately. The suspension is indefinite.
More equipment and personnel have been deployed in the site to save more lives.
Mr. Sanwo-Olu thanks all first responders and those who have joined the rescue efforts, including construction giants Julius Berger, Chinese Civil Engineering Construction Corporation (CCECC) and the National Emergency Management Agency (NEMA).
A help desk is to be set up at the site for people seeking information about their relations who may have been involved in the incident. The media are hereby notified that the government will be releasing information whenever the need arises to avoid any sensational reporting of the unfortunate incident.
The Deputy Governor, Dr Kadri Obafemi Hamzat, was today at the site to encourage rescuers and comfort relations of those trapped in the rubble. Dr. Hamzat left the site for the Lagos Island General Hospital to see the survivors.
The government will embark on further foundation and borehole acidic level tests to ascertain the impact on the collapsed building. These tests, particularly the borehole acidic level, is important for the entire Gerrard Road and adjoining areas.
READ ALSO: Casualties, people trapped at Lagos bridge
SHARE THIS ARTICLE 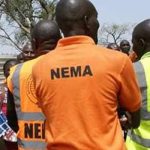