After 114 days in DSS custody, two Igboho’s aides including a woman, released in Abuja

The remaining two aides of embattled Yoruba Nation agitator, Chief Sunday Adeyemo a.k.a Igboho Oosha, who have been in DSS custody in Abuja since July 1, on Friday breathed air of freedom.

Those released including the only woman among the 12 arrested by the Department of State Services are Amudat Habibat Babatunde (Lady K) and Jamiu Noah Oyetunji.

“This is to officially announce the release of Amudat Babatunde Abibat AKA Lady-K and Jamiu Noah Oyetunji, the remaining two Sunday Igboho’s aides, from the State Security Service Custody.”

“While the matter is still a subject of litigation, we shall have no comment further on this for now,” the detainees’ lawyer, Mr Pelumi Olajengbesi, confirmed their release in a statement given to Persecondnews. 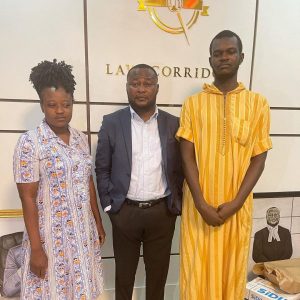 On July 1, 2021, the DSS had led a bloody midnight raid of Igboho’s house in Ibadan, Oyo State capital and arrested 12 of his associates, who were whisked away to Abuja.

The DSS later bowed to pressure after court rulings granting them bails by releasing 10 of them.

The DSS, however, held on to the remaining two in spite of an order by Justice Obiora Egwuatu of the Federal High Court, Abuja on August 4, releasing all the 12.

Persecondnews had reported that instead the DSS filed a five-count charge bordering on terrorism against the woman and the man.

Igboho's AidesSunday Igboho
Share
Subscribe to our newsletter
Sign up here to get the latest news, updates and special offers delivered directly to your inbox.
You can unsubscribe at any time