Persecondnews reports that policemen were on standby but tried to stop the protesters as they march to the National Assembly.

As Nigerians commemorate the one year anniversary of the #EndSARs protest, the publisher of Sahara Reporters and convener of Revolution Now Movement, Omoyele Sowore, and human rights activist, Deji Adeyanju, on Wednesday led a peaceful protest in Abuja.

The protesters kicked off with the national anthem amid heavy security presence.

Chanting anti-government songs and #EndSARs slogans, the protesters, who had massed at Unity Fountain in the nation’s capital, called on the Federal Goverment to stop police brutality across the country.

Persecondnews reports that policemen were on standby but tried to stop the protesters as they march to the National Assembly.

Adeyanju criticized federal and state authorities for failing to address the issues raised by EndSARs protesters one year ago. 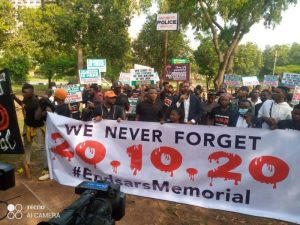 “It is sad that the so-called police reform and compensations for the families of those who lost their lives in 2020 protest have not been done. It’s a shame,” he said.

Sowore had earlier in a statement:”Our attention has been drawn to the latest statement credited to the Lagos state Command of the Nigeria Police to the effect that no “street protests” will be allowed tomorrow (Wednesday) to mark the historic #Endsars rebellion of 2020 and its attendant fallout due to police repression and Nigerian Army’s murderous intervention.

“We state unequivocally that it not within the powers of the Nigerian police to stop citizens from engaging in street protests, the right to engage in protest against unjust policies, tyranny and oppression is an inalienable right and as such these latest claims are at best superfluous and belligerently arrogant.

“We urge the police authorities to ensure they carry out their duties to protect protesters who will be on the streets by way of cars, bicycles, tricycles, skateboards and by foot all over Lagos and its environs tomorrow (Wednesday).

“The Lagos state police commissioner will be personally held liable if anything untoward happens to any Nigerian citizen engage in lawful protest during the #Endsars anniversary.” 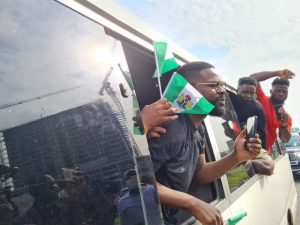 In Lagos, vehicular procession was the strategy used by the protesters along the Lekki Toll Plaza and in Ikeja.

Meanwhile, the Lagos State Police Commissioner, Mr Hakeem Odumosu, has said gathering in any form or shape for protest was not allowed.

“The Endsars protesters and police agreed that there will be procession in their vehicles. They are free to blare their horns, wave their banners, flags.

“They must keep moving while they are protesting. No problem but no gathering at Lekki Toll gate or in any part of the state,” Persecondnews quotes Odumosu as saying at the Toll Plaza where he had gone to personally monitor the situation.

On the legitnews online journalist that was arrested by the police, Odumosu said he had directed his men to release him after he was identified by his colleagues as he could not produce any means of identification.i

#ENDSARSRevolution Now Protests
Share
Subscribe to our newsletter
Sign up here to get the latest news, updates and special offers delivered directly to your inbox.
You can unsubscribe at any time

#EndSARS: One year after, FG yet to receive evidence of killings at Lekki tollgate — Minister