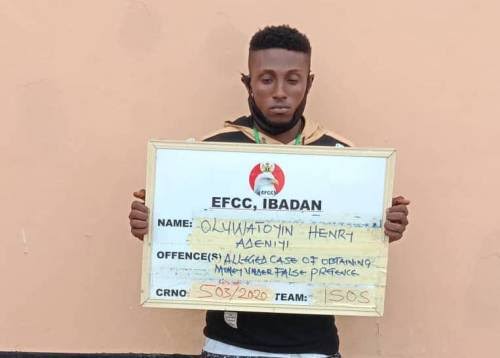 Oluwatoyin Henry, a university student, has been sentenced to a six-month jail term for obtaining money under false pretences and scamming an American woman, reports Persecondnews.

The conviction was secured by the Economic and Financial Crimes Commission (EFCC) Ibadan Zonal Office at an Oyo State High Court sitting in Ibadan.

According to a statement issued by EFCC’s Head of Media and Publicity, Wilson Uwujaren, Henry had been accused of obtaining a sum of $1,200 from one Betty Mosley, while pretending to be a citizen of the United States of America.

The prosecutor told the court that Oluwatoyin Henry, sometimes in 2019, in Ogbomoso, defrauded and obtained $1,200 from one Betty Mosley, as well as impersonated a citizen of United States of America by name Amanda, who fell in love with him.

Henry, who claimed to be a student of Ladoke Akintola University of Technology, Ogbomoso, had pleaded guilty to the amended charge and entered into a plea bargain with the prosecution.

Justice Sherifat Adeyemi, in her judgment, said: “Based on his plea, he was convicted and sentenced to six months in prison.

“He was also ordered to restitute the sum of $1,200 USD (One Thousand Two Hundred United States of American Dollars) to his victim, and forfeit his iPhone 11, one Infinix Hot 5 and a Nokia phone to the Federal Government of Nigeria.”