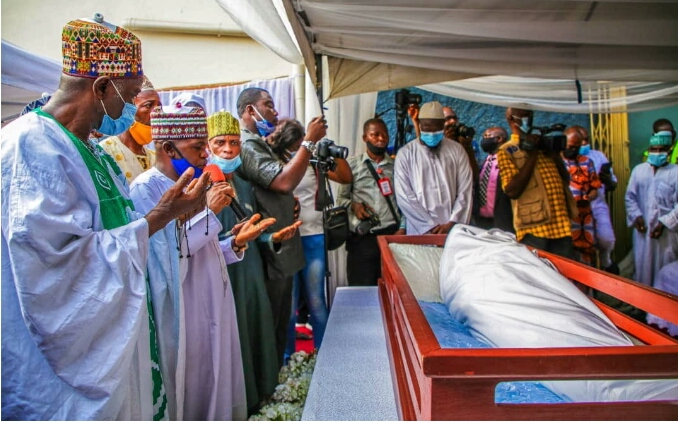 Ex-Governor of Lagos State, Alhaji Lateef Jakande, who passed on peacefully at his Ilupeju residence, was on Friday buried in Ikoyi cemetery according to muslim rites.

The funeral was conducted with strict observance of COVID-19 protocols.

Jakande, the first civilian Governor of the state (1979- December 31,1983) and former Minister of Works and Housing, died on Thursday at the age of 91.

One of the clerics, Imam Lookman Junaid of Sangrose Mosque, Lagos Island described late Jakande as the best governor Lagos state ever had.

“May his soul rest in perfect peace. We have not seen any governor that has achieved what Jakande achieved. May God grant him Aljanal Firdau. Many people became educated just because of him.

“Many of us are educated just because of him. What about the roads, interconnectivity of Lagos, housing and other legacy projects.

“He did a lot within a four year term. If he had been given the second term, he would have achieved more.

“No governor has ever achieved what Jakande achieved. He was a merciful governor. He was not self-centered.

“He was open minded and spent public funds for the public. He didn’t embezzle public funds. He lived well and he died well,” Juniad said.

Retired Commodore Ebitu Ukiwe, one-time military governor of Lagos State, who handed over to Jakande in 1979, described him as a man of peace and honour who governed the state very well.

Pa Jakande was born in the Epetedo area of Lagos State 29 July 1929 Both parents are from Omun Aran, Kwara.

He was the governor of Lagos State for four years and three months before the military government led by Gen. Muhammadu Buhari over the then President Shehu Shagari, thereby truncating the Jakande administration.

His achievements all within a space of four years are listless:

* His government built the current Lagos State Secretariat which houses all the state ministries as well as the popular round house hitherto occupied by all subsequent governors of the state.

* His government built the Lagos State House of Assembly complex.

* His government built the Radio Lagos

* His government established General Hospital in zones all over the state with assurance of free health care.

* His government established Teacher Training College and the College of Education.

* His government established the Water Management Board and Waste Disposal Board on the 18th of August, 1980.

* His government constructed the Adiyan Water Works to increase water supply in the state to 18.16 million litres per day.

* His government modernized and expanded the Iju Water Works which was first commissioned in 1915. This increased daily capacity from 159 million to 204 million litres per day.

* His government purchased and commissioned the giant car crusher equipment. The equipment was designed specifically to crush derelict vehicles in Lagos State. It had the capacity to crush 45 vehicles per day.

* His government established Asphalt Plant for the Department of Public Works.

* His government established Electricity Board for Rural Electrification with provision of street lights.

* His government modernized, expanded and commissioned Onikan Stadium in 1982.

* His government established a singular school system and ensured genuine free education in Lagos State and the beneficiaries of this policy are in different positions of eminence in the country and around the world.

* In July 1983, two commercial passenger boats christened “Baba Kekere and Itafaji” to run the Mile 2 – Marina (CMS) route via the lagoons were inaugurated by his government to mark the official launch of the Lagos State ferry services.

*His government expanded existing market and built new ones.

*His government established Traditional Medicine Board. 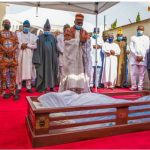 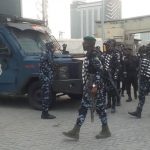