...warn against politicising security, want reinforcement of security personnel presence in the zone 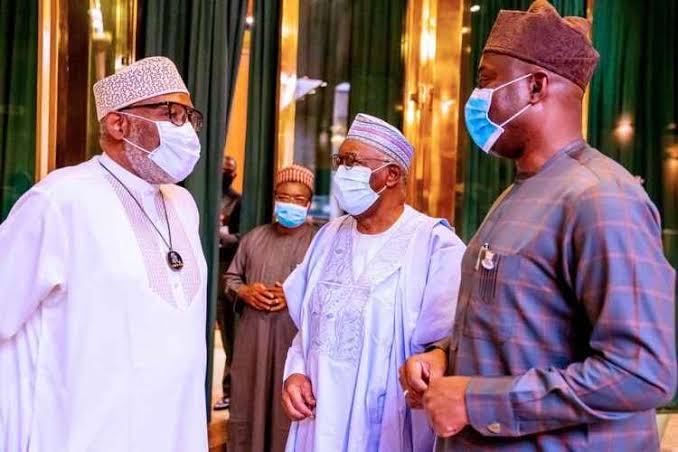 The meetings which were held separately behind closed-doors is believed to have centered on escalating insecurity in Southwest.

Oba Ogunwusi told State House correspondents that his visit was to reinforce his appeal to the president not to allow the issue of security to be politicized. 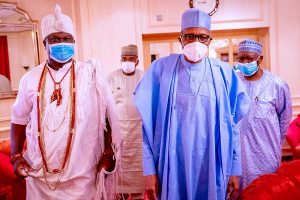 “I am here particularly because of all the issues of security threat here and there and to get the blessing of Mr. President, so that it won’t turn out to be very political because political parties might probably want to hijack it.

“And to the glory of God as the co-chairman of National Council of Traditional Rulers, it is our responsibility and our fiduciary duty to make sure that everything is right, all and sundry is in good shape.

“So, the take home here is the President has assured that it is not going to be a political thing because we all know the problem all over the country, we have a lot of bad eggs that mix across the entire country and we are having that issue again in the Southwest.

“So, I am here as the co-chairman of National Council of Traditional Rulers to get the assurance of Mr. President that either of the parties won’t turn it to be a political funfair for us to just risk the lives of our people, our innocent citizens not only in the South West but the entire country.

“I am happy he has told me that I should assure other traditional rulers that we must work with them now. It is very important for us to work very closely with the government so that we can separate the good, the bad and the ugly,” the monarch said.

On the nation’s porous borders, the Ooni expressed hope that the introduction of “e-border” would make policing the borders more efficient.

“Even our governors and other political rulers in different states, Mr. President have assured that they must work with the traditional rulers so that we can actually separate the good from the bad and get the right society in proper perspective .

“So, here, the objective is politics shouldn’t be mixed with the safety and the security concerns of our people. Politics should be completely taken out of it and to the glory of God Mr. President said he is fully on board with us as traditional rulers,” he stressed.

On the replacement of Service Chiefs, the Ooni said that the president’s action was positive as it would bring fresh ideas to the fight against insecurity.

Ogunwusi said: “It is a very positive coincidence for me, it’s a good refreshment, there is a new blood, a new intake, fresh ideas will come on board and we have actually giving very positive encouragement to Mr. President that he should keep it up. It is a very courageous move for fresh minds.

“At least, there has been a lot of hue and cry of security issues in Nigeria now, we are not all safe but with what Mr. President has done and providentially I am experiencing it at the seat of power, it is a welcome development.

“Everybody in Nigeria will be very happy about it and we expect more of refreshments within the confines of this government because it is a legacy that he is building for himself and we will continue to support that legacy for the betterment of our country. So, it is a good thing that Mr. President has done.”

Gov. Makinde also told State House reporters that he came to brief Buhari on the security situation in the state. 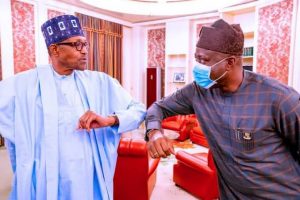 “There has been a lot of fake news all around and I wanted to be sure that Mr. President clearly have first hand information from me, which I did.

“We also exchanged ideas on what we need to do better, some of the programmes we have put in place to ensure that this security issue is tackled. So, that’s basically why I came here.”

“One of the issues I discussed with Mr. President is that Oyo State land mass is quite big, Oyo State is close to 29,000 square kilometers.

“If you take all the states in the south east geo-political zone of Nigeria, they are still not as big as Oyo State. And the state right now only has two Mobile Police Squadrons.

“So, I requested for more Mobile Police Squadrons to be deployed to Oyo State and also ask for support for the joint security outfit because, the underlying issue here also has to do with limited opportunities.

“The tension will definitely go down if a lot of our youths are gainfully employed. So, I briefed the president on what we are doing in that regard,” Persecondnews quotes the governor as saying.

On the ultimatum given by activist Sunday Igboho, for Fulani herders to leave Oyo State, the governor said: explained: “We have a history of living together peacefully amongst all the ethnic groups that are present in Oyo State.

“For instance, what triggered all of this was that Dr. Aborede was brutally murdered, that is criminal, but on the other hand, Seriki, Alhaji Kabir has been staying in that same place for 40 years.

“The Constitution of Nigeria guarantees that you can live in any part of Nigeria, you just have to be law abiding, obey the local laws in such areas. That is what we are pushing and will continue to push as a government.” 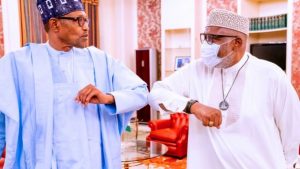 However, Gov. Akeredolu declined comment on the outcome of his meeting with President Buhari after the governor had given the killer-herders a seven-day deadline to vacate Ondo forest reserves.

Gov Seyi MakindeGov.  Rotimi AkeredoluOoni of IfePres. Buhari
Share
Subscribe to our newsletter
Sign up here to get the latest news, updates and special offers delivered directly to your inbox.
You can unsubscribe at any time