Two men arraigned in court for spitting on traffic police 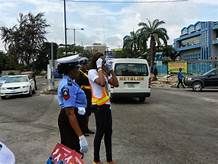 For allegedly spittling on a traffic police on duty, two men have been apprehended and hauled up before a Chief Magistrates’ Court in Surulere, Lagos.

Charged with spitting on the policeman’s face are  Kabiru Sadiku,32, and Kehinde Junaid, 37,
both residents of Surulere.

The duo is facing a two-count charge of conspiracy and assault to which they pleaded not guilty.

On March 12 at 11.00 a.m. near the National Stadium, Surulere,  the men allegedly and maliciously assaulted ASP Livinus Ogbobo.

, “They spat on his face while performing his lawful duty as a traffic official, controlling vehicles to ensure a free flow of traffic,’’ Police Prosecutor Christopher Okoliko told the court at their arraignment.

The offences violated Sections 174 (b) and 411 of the Criminal Law of Lagos State, 2015, according to the prosecution.

The court imposed a N60, 000 bail and two sureties on the alleged spitters.