…blasts orchestrators as blinded by 2023 ambitions

Fazed by the ongoing political intrigues and plot to weaken the institutional core of the All Progressives Congress (APC) and take over its soul, the National Leader, Asiwaju Bola Tinubu, has blasted elements orchestrating it as sick, saying the vision for building the party was being destroyed.

Taking his party faithful down the memory lane, Tinubu said: “Many of us expended sweat, tears, toil and sleepless nights to build this party. Our personal sacrifices were not insignificant.

“We built this party not simply as a vehicle for personal ambition. We built the party because we saw it as perhaps the only enduring hope to bring progressive governance to this nation.

“Those who now seek to abuse the party by using it as their personal device do it great harm.  They should not be allowed to sacrifice this collective enterprise at the altar of their self-aggrandizement.

“Somehow, some way they should find in themselves the bearing to adhere to the democratic spirit on which the party was founded.’’

“To be an APC member means more than merely carrying a membership card. It means to believe in a set of ideals and principles geared to our highest purpose as a party and a nation,’’ the former Lagos State Governor said in a statement personally signed by him, a copy of which was emailed to Persecondnews.

Describing those fanning embers of discord and distintegration of the party as plotters, Tinubu said those who engage in these manoeuvres saw themselves as “clever or cunning.’’

“They do so because they only understand the mean craft of political intrigue. They have yet to understand the value and long-term utility of democratic governance. Thus, they embark on the strangest of quest.

“They would rather dismantle and weaken the institutional core of their party just to gain control of that weakened edifice in order to pilfer the party nomination which they crave.

“This is more than sad,’’ he said, blaming those who saw the National Chairman of the party, Mr Adams Oshiomohole, as an obstacle to their 2023 ambitions for orchestrating the crisis in the party.

“The plotters launched their attack solely because they perceive the chairman as an obstacle to their 2023 ambitions. People went to court knowing full well the party constitution prohibits such action because these people had not yet exhausted all internal disciplinary procedures.

“We even had a national deputy secretary improperly call for a NEC meeting on the basis that he believed himself the acting national chairman.

“Clearly, this man would not have summoned the temerity to make such a move had he not been instigated by powerful individuals who he thought would reward or, at least, protect him for committing the wrongful act,’’ Tinubu said pointing fingers at some powerful forces in the party.

Admitting that Oshiomohoe might have been on a fault line, he said: “The Chairman is human; thus, he has his merits as well as his flaws. Yet his humanity cannot be grounds for his dismissal. If so, the position will forever go vacant.

“The Chairman has been a tireless campaigner and mobilizer for the party. He has steered the party through difficult elections. His contributions should not be undervalued now that the bulk of elections are behind us.

“To do so would be an act of ingratitude. It is no secret that the Chairman and Edo Governor Obaseki are in dispute. This is unfortunate.

“However, the party has moved through proper procedures within the proper organs of the party to hopefully resolve this spat.’’

Tinubu, whom some party faithful tipped as a 2023 presidential aspirant,  expressed gratitude to God for the containment of  Coronavirus both in Lagos and Ogun States, and alerted that another virus has hit the polity — “Ambition-virus 2023’’.

He added: “While Corona has been presently contained in Nigeria, we must be alert to another sickness that seems rampant within a certain segment of society. That sickness is old Ambition-virus 2023.

“This illness afflicts many in the political class along with their allies in the media. Those touched by this malady find that their ability to tell time and discern the difference between the present and the future has been strongly impaired.

“The carriers of this sickness are confused as to the very season our nation now finds itself. They conflate things, which no sensible person would conflate. The primary symptom of their malady is the driving tendency to believe the events of 2023 will be decided before we even exit the year.

“Consequently, everything they say and do is geared toward obsessive jockeying for position to control and manipulate a race still three years away. In doing so, they recklessly undermine the very party which they claim to serve and weaken the administration of President Buhari to which they claim to be loyal.

“They line up to run a race for which the track has not even yet been constructed. Put another way, they seek to pluck the fruit before the seed is even planted.

“They express loyalty to him (Buhari) but the words of too many of our politicians are like butter under a burning sun; they melt quickly away.’’

Tinubu, however, appealed to those forces to shelve political intrigues for the time being and work with President Buhari “for the collective good of the nation.’’ 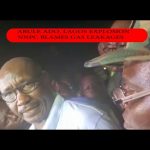