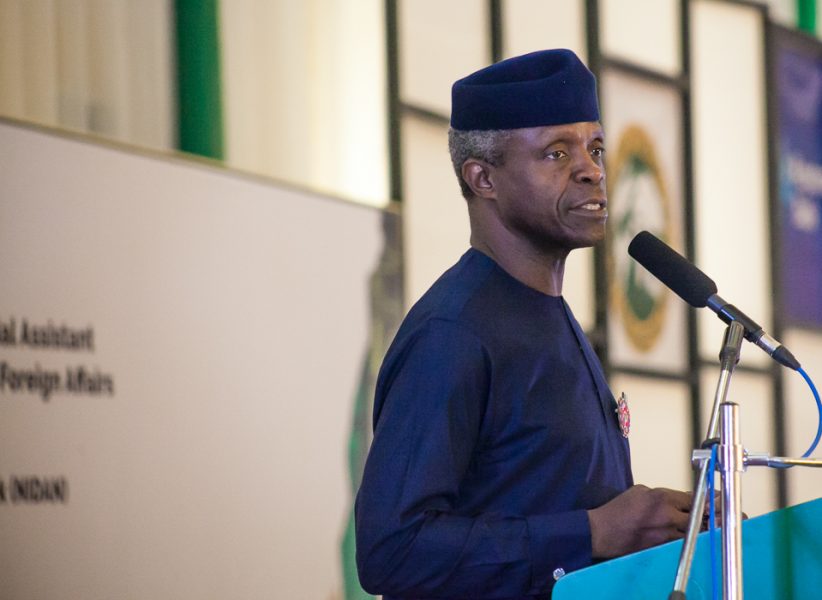 Eminent Nigerians from all walks of life from political leaders to the clergy have continued to pour encomiums on the Vice-President, Professor Oluyemi Oluleke Osinbajo, GCON, as he turned 63.

“The Vice-President has shown exceptional loyalty in government and dedication to his duties.

“Professor Osinbajo has brought his diverse experiences to bear on his role in government and demonstrated that one can actively participate in politics at the highest levels and yet maintain personal integrity and high reputation,” he said in a congratulatory message by his Special Adviser on Media, Mr Ola Awoniyi.

I am proud to join Osinbajo’s family, friends and associates in celebrating a “great Nigerian leader and role model.”

For the Deputy Senate President Ovie Omo-Agege, Osinbajo is one of the prime figures driving the ruling party, All Progressives Party (APC) and President Muhammadu Buhari’s change agenda.

He said the robust stature of the vice-president’s intellectual presence and his pragmatic actions in the area of public sector reforms had their roots in noble antecedents.

“Among other achievements, he addressed access to justice for the poor by establishing relevant institutions in the Office of the Public Defender (OPD) and the Citizens Mediation Centre (CMC).

“He is not only a successful lawyer; he was a member of the International Bar Association, the British Institute of International and Comparative Law and has served in the Nigerian Body of Benchers and the Council for Legal Education of Nigeria with a great record of active involvement in the pursuit of legal education reform in Nigeria.

“Today, I join his family, associates and other citizens of our great country in wishing our dear Vice President a happy birthday and many more years of active contribution towards the upliftment of the masses and our people-focused agenda.

“Mr. Vice President, you are heading a legacy of cerebral contributions and active roles towards genuine populist change in Nigeria; once again, I wish you a happy birthday,” he said.

Mr Femi Gbajabiamila, Speaker of the House of Representatives said Osinbajo stands out as one of the most honest persons he has ever come across.

Recalling how Osinbajo served as the Attorney General and Commissioner for Justice in Lagos State for eight years to the satisfaction of all, he said: “Our Vice-President, Prof Yemi Osinbajo, who is marking his 63rd birthday today, is someone very dependable in all ramifications.

“Apart from being a reliable human being, the VP is one of the most honest people I have come across in my life. I make bold to say that the VP has qualities worthy of emulation by other Nigerians.

Also felicitating with him is Osun State Governor Gboyega Oyetola, who described him as a great leader who has used his knowledge to assist the president in tackling security challenges, fighting corruption and revamping the nation’s economy.

“He is a successful legal practitioner, an accomplished public servant, committed and patriotic Nigerian, whose commitment to the unity and progress of the country is never in doubt.’’

Oyetola extolled the leadership qualities he has exhibited as the Vice President of the country and head of the National Economic Council (NEC).

“I thank God on your behalf for the remarkable achievements and accomplishments he has enabled you to record both in private and public life.

“You are a great leader whose attributes are worthy of emulation by the younger generation of Nigerians.

“I also praise you for being a faithful and dependable ally of President Muhammadu Buhari. You are doing well to assist the president in achieving his administration’s agendas.

“I pray God to grant you and President Buhari the needed wisdom and strength to continue to lead the country on the path of economic recovery and growth and take Nigeria and Nigerians to the much desired Next Level of progress, development, and prosperity,’’ Oyetola said in a statement by his Chief Press Secretary, Mr Ismail Omipidan.

The clergy under the aegis of the Pentecostal Fellowship of Nigeria (PFN) has also congratulated Osinbajo extolling his exemplary conduct and strength of character.

PFN joined his family in thanking God for his life and indelible contributions he had made in the development of Nigeria and in the Christendom.

“We appreciate the grace of God upon the life of the VP and the work he is doing for Nigeria,’’ the PFN President, the Rev. Dr. Felix Omobude said, describing Osinbajo as one who is held in high esteem by members of the PFN, not only because he is a part of them but also on account of his exemplary conduct and strength of character.

“For us, Vice President Yemi Osinbajo is an Ambassador for the Christian community, who is presently on national assignment. We are proud of how he has continued to discharge his duties with the sense of humility, wisdom and dignity required of such high office.

“We appreciate the grace of God upon his life and the work he is doing for our nation.

Our prayer for him is that he will continue to stand strong to the true dictates and tenets of the faith, to the glory of God and that he would not be lacking in terms of vision and courage to stay true to his beliefs.

“We wish him many more years, in good health and vitality, and greater impact in his service to fatherland, now and in the future,” the body said.

The APC described the VP as a patriotic and dogged partner in ensuring the development of Project Nigeria.

The National Publicity Secretary, Malam Lanre Issa-Onilu, said:“We note the untiring efforts of the Vice-President in partnering and assisting President Muhammadu Buhari, in tackling insecurity, fighting corruption and resetting the nation’s economy on the path of growth and development.”

Of particular note is Osinbajo’s massive contributions in the success of the APC-led administration’s Social Investment Programme (SIP) reputed to be Africa’s biggest and most ambitious social welfare policy for the most vulnerable in our society.

APC wrote: “Our great party also applauds the Vice President’s headship of the National Economic Council (NEC), a development, which has ensured a more beneficial synergy between the federal and state governments in quickly and frontally addressing issues that are pertinent to the welfare of Nigerians.

“Our party is not in any doubt that the commendable partnership of the President and the Vice President would take Nigeria to the Next Level of peace, progress and prosperity.”

Osinbajo at 63: Wife celebrates him, calls him “my treasure”