Lagos Traffic official hangs self on the road 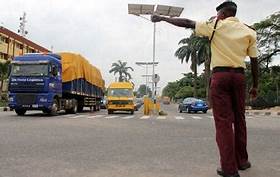 … family says he is mentally ill

A Lagos State Government official, who allegedly suffers psychiatric disorder, has committed suicide by going for the rope on the highway.

The deceased, identified as Tope Akinde, was until his death an official of the Lagos State Traffic Management Authority (LASTMA).

The dangling body was seen on the pole of a billboard beside a Mango tree near Salvation Bus Stop at Opebi in Ikeja area.

It was learnt that the incident which occurred at about 9.10 a.m. caused a slow movement of traffic on the road as motorists, residents, and passers-by gathered to catch a glimpse of the body.

A spectacle commonly used by commercial motorcyclists was found in the pocket of Akinde, who wore a canvass, jeans trousers and a black shirt, a witness said.

Police said on Saturday that a female LASTMA official informed the command about the incident.

According to the State Police Command’s spokesman, DSP Bala Elkana, Akinde’s elder brother had told the police that he had been suffering from mental illness for a while.

He said the corpse had been deposited at IDH Hospital, Yaba mortuary.

LagosLASTMA
Share
Subscribe to our newsletter
Sign up here to get the latest news, updates and special offers delivered directly to your inbox.
You can unsubscribe at any time