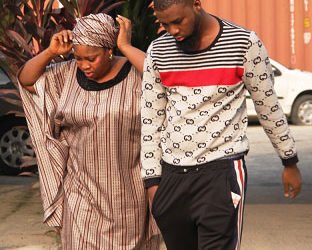 Trapped in the quicksand of internet fraud, a mother and son are to spend 12 years in jail each for duping an American of $82,570.

The partners in crime — Mrs Damilola Ahmed Adeyeri and her son, Alaba Kareem Adeyeri – were convicted after pleading guilty to the four-count charge bordering on  fraudulent trick business email compromise slammed on them by the Economic and Financial Crimes Commission (EFCC).

Justie Chukwujekwu Aneke of a Federal High Court in Lagos, who handed down the verdict, sentenced each defendant to three years’ imprisonment on each of the four counts.

He said the sentences would run concurrently, that is, Mrs Adeyeri and her son will spend a maximum of only three years in correctional services custody.

She said they committed the offence in June 2017 and were arrested on September 6, 2019.

The prosecutor said Mrs Adeyeri and her son carried out the fraud by “dishonestly representing yourselves as the CEO of American Cranes Manufacturing Company and thereafter you sent an email from personal@managements-securemail-office-portal. online with intent to gain advantage to yourselves.”

The offences also violated Sections 421 and 422 of the Criminal Code Act.

Buhari had called an EFCC investigator, Idi Musa as witness.

Musa testified that sometime in April 2019, the commission received a petition from the Federal Bureau of Investigation (FBI) of America, stating that the official email address of American Cranes Manufacturing Company was hacked and the sum of $82, 570. 00 was lost to the fraudsters.

He told the court that the FBI reported that there was a syndicate of fraudsters who defraud companies through business e-mail compromise and obtain millions of dollars from American citizens.

Idi said Damilola was arrested on September 6, 2019, after which his mother was apprehended when she went to withdraw money from the bank upon hearing that EFCC was investigating her son.

She purchased properties in the name of her son with the money made from the fraud.

The court heard that the monies stolen by the convicts were used to acquire properties in choice areas of Lagos, and some cash was also found in their bank accounts.

Earlier, the prosecutor had asked the judge to apply the maximum sentence possible on the convicts to serve as a deterrent.

Justice Aneke agreed that although the convicts immediately admitted guilt and showed remorse, he had a duty to apply punishment in accordance with the law to serve as a deterrent to others.

He overruled: “I will  temper justice with mercy because the convicts, by pleading guilty immediately, had saved the court’s time.

“Consequently, I hereby sentence each of the convicts to three years on counts one, two, three and four. The sentences are to run concurrently.”

All the properties and monies recovered from the convicts be forfeited to the Federal Government and upon applications by the victims, be restituted to them, court also ruled

AdeyeriEFCCNigeria
Share
Subscribe to our newsletter
Sign up here to get the latest news, updates and special offers delivered directly to your inbox.
You can unsubscribe at any time

About $1m worth of counterfeit money from China seized at U.S port