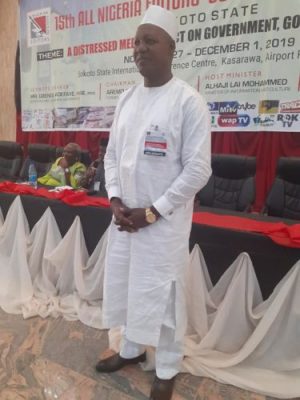 Mr Mustapha Isah, has emerged the new President of the Nigerian Guild of Editors (NGE).

He succeeds Mrs Funke Egbemode, who has been appointed the Commissioner for Information and Civic Orientation in Osun State.

The election by ratification held in Sokoto at the ongoing 15th All Nigeria Editors’ Conference (ANEC 2019) opened by Gov. Aminu Tambuwwal of Sokoto State.

Before his elevation, Isah was the Vice-President (West) of the guild.

Isah, who thanked members for the confidence reposed in him, said: “I am not the best. Anyone of us is capable of being the president.

“I am ready to listen to everyone. I will not fail you, I will listen to all, I will make the Guild an indivisible entity.

“I will not trade with the name of the Guild and I shall be just to everyone.’’

The guild had on July 1 this year lost its Deputy President, Malam Umar saidu Tundun Wada in an accident on Abuja-Kano road

Nigerian Guild of Editors
Share
Subscribe to our newsletter
Sign up here to get the latest news, updates and special offers delivered directly to your inbox.
You can unsubscribe at any time

The Day In Pictures: Buhari in Katsina amid cheers

Aisha Buhari to governors, ministers: Fear God, we shall all return to Him one day