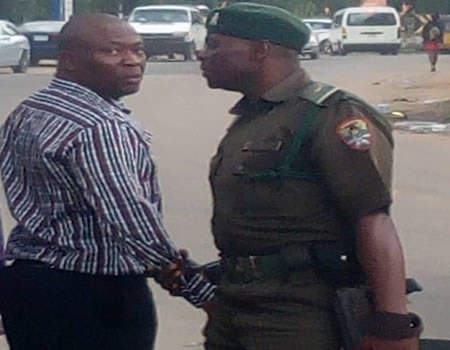 … Judge: You are conscienceless, wicked, an animal and not fit to walk on the streets

A 47-year-old child rapist and school supervisor, Adegboyega Adenekan, is to spend the rest of his life in jail, according to a judgment handed down by a Lagos court on Thursday.

For defiling a two-year-and 11-month old child in his school’s creche, violator Adenekan, was given 60 years imprisonment.

Adenekan was convicted for the defilement of the child, who attended Chrisland School, VGC, Lekki sometime in November 2016.

Delivering his judgment, Justice Sybil Nwaka of the Lagos State Special Offences Court,  described the convict as “conscienceless, wicked, an animal and not fit to walk on the streets.’’

“I hereby sentence Adegboyega Adenekan to 60 years imprisonment; this is the sentence of the court.”

Just before she pronunced the verdict, Nwaka recalled that the pupil had high intelligence quotient and could give a vivid and consistent narration of how she was defiled by Adenekan while she was wearing her school uniform.

The judge noted that the child testified that she was defiled twice by Adenekan;  once in his office and the second time in a hall.

The essential ingredients to prove a charge of defilement was that the defendant had sexual intercourse with a child under 11 years and that there was penetration into the vagina, she said, insisting that the prosecution had proved its case beyond reasonable doubts.

The judgment read in part: “Sexual intercourse can be by hand, penis, cucumber or any blunt object.

“Sexual intercourse is essentially the insertion of the penis into the vagina for pleasure, reproduction or both.

“In our present case, there is a certainty of penetration. Penetration, however slight, is sufficient; it is not necessary if an injury is caused or the hymen ruptured.

“Penetration was corroborated by Exhibits E1 to E3; the evidence of the victim was not unshaken as to who put his ‘wee-wee’ in her ‘wee-wee’.”

Justice Nwaka, however, advised parents not be carried away by the aesthetics of schools, saying this case may just be the tip of the iceberg as a lot of our children are suffering in silence.

The judge advised parents to be bold enough to confront teachers and school management when necessary on such suspected cases of rape or defilement.

She wants Education and Social Welfare Ministries to visit schools from time-to-time to monitor and report the happenings in the schools.

47-year-old child rapist gets life sentence
Share
Subscribe to our newsletter
Sign up here to get the latest news, updates and special offers delivered directly to your inbox.
You can unsubscribe at any time