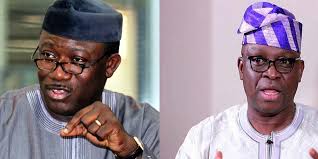 A mind-boggling revelation came from Ekiti Governor Kayode Fayemi on Tuesday almost a year after he took power said that workers in the state were currently owed N57 billion arrears of salaries and emoluments.

The flamboyant immediate past governor, Ayodele Fayose, is being fingered by Fayemi for the huge debt.

Fayemi, a second term governor, had in 2018, when he took over promised not to probe Fayose, whose administration was known for irregular payment of salaries.

Fayose collected three tranches of Paris Club refund and bail-out funds from the Federal Government as interventions to settle arrears of salaries.

He is currently being prosecuted by the Economic and Financial Crimes Commission (EFCC) for money he collected from the erstwhile National Security Adviser, retired Col. Dasuki, under President Goodluck Jonathan administration for his election by the then Minister of State for Defence, Musiliu Obanikoro.

Speaking at a meeting with civil servants and labour leaders in Ado Ekiti, the capital, Fayemi, however, said his administration was making frantic efforts to defray the backlog in phases.

He said the arrears covered outstanding salaries, pensions, promotion arrears, leave bonuses and other emoluments from 2014 till October 2018 when Fayose called the shots as governor.

Fayemi restated his commitment to “honour’’ his earlier pledge to pay all the outstanding workers’ benefits.

“It is sad to reel out such a humongous figure because it can create panic for you and me.

“But let me say that we cannot pay everything in one fell swoop, but the 2019 promotion arrears will be given immediate attention while others will be defrayed in instalments. 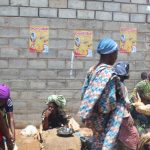 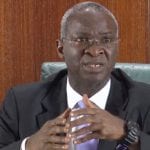