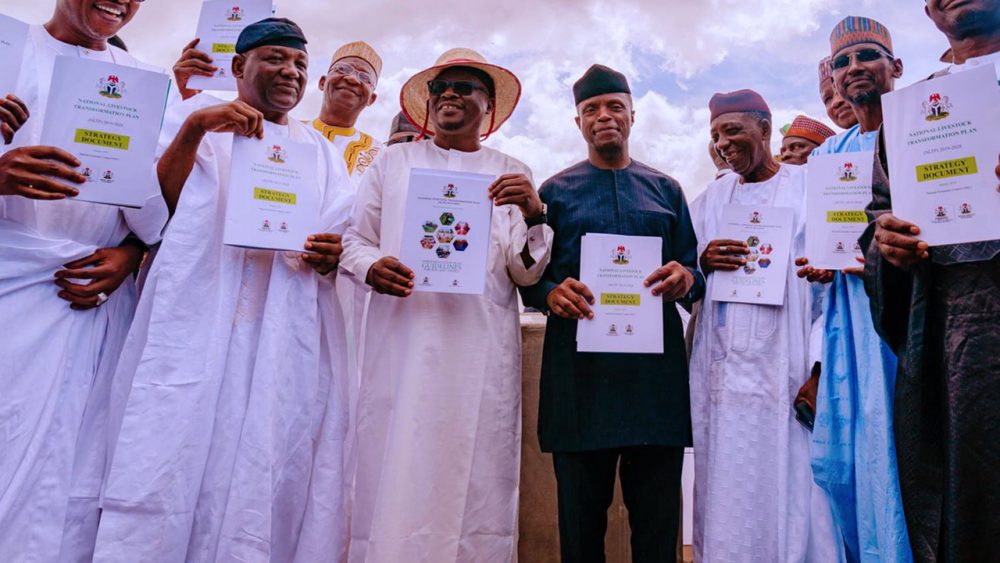 Share
Residents of Adamawa State has lauded the National Livestock Transformation Plan (NLTP), flagged off by the Vice President, Prof. Yemi Osinbajo, at Gongoshi farm in Adamawa State.
The residents displayed placards that showed their acceptance of NLTP, and disapproval of the suspended RUGA, as
one the placards read “No Foreign Herdsmen” while another read, “No To Mobile Livestock Husbandry”.
The placards were displayed by the local herdsmen and farmers who are beneficiaries of the scheme, and fully support the Plan which emphasised ranching and crop farming side by side.
The Gongoshi Grazing Reserve would host 772 pastoral families and 192 crop farmers under the NLTP arrangement.
The NLTP is the plan agreed to by the 36 governors under the auspices of NEC.
The residents also said NLTP will bring an end to grazing, which has often led to farmer-herder clashes across the country including Adamawa state.
A farmer, Mathew Nyako told newsmen that NLTP will bring about jobs and economic stability for both livestock owners and farmers, saying “The idea by the government is good because all the livestock will be stationed in a place and would not interfere with our farms.”
Similarly, Timawus Namdas, said that more jobs will be created especially for those who were displaced, adding “Some members of our communities have been unable to find jobs but this has brought hope to them.”
A herder, Abubakar Aliyu, said he welcomed NLTP because his cattle can be nurtured in one place.
“The cows will grow bigger if they are put in one place, we will not have to move them around. We will have food and water on this ranch, and that is what we need for our cattle to grow,” he stated.
The Adamawa State Governor, Ahmadu Fintiri, invited the Vice President to launch the scheme which according to him “clearly seeks to show that if cattle are sedentary, they will produce more milk and herders and crop farmers can co-exist peacefully.”
AdamawaNLTPProf. Yemi Osinbajo
Share
Subscribe to our newsletter
Sign up here to get the latest news, updates and special offers delivered directly to your inbox.
You can unsubscribe at any time