Update: No cause for alarm, Dino Melaye reacts to Tribunal’s nullification of his election

Sep 24, 2022
APC candidate, Smart Adeyemi, had challenged Melaye’s election on three grounds of irregularities, over voting and non compliance with the electoral act.
A unanimous judgment, delivered on Friday in Abuja by a three-man panel led by Justice A. O. Chijioke, accepted Adeyemi’s ground and ordered for a fresh election in the senatorial district.
Reacting via his Twitter handle; @dino_melaye, Dino said he would get judgement at the Appeal court.
He posted; ”On Tribunal judgement. No cause for alarm at all. Even if it went my way they will still go to the Appeal Court. Our mandate can not be taken. We will get judgment at the Appeal Court.
”There will be fresh election in Kogi West because I will be Governor. For my Senate mandate no shaking. He who laugh last, laugh best…KOGI Governor loading.” 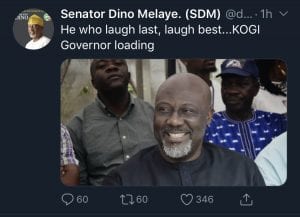 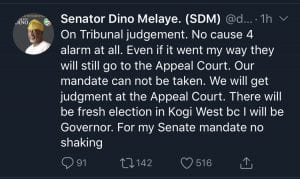 Dino, who had earlier reacted on the ruling of the tribunal via his twitter handle, has also reacted officially through a press statement issued on Friday.

The statement read: “I, however, commend the courage and moral strength of the chairman of the tribunal for resisting evil and standing on the part of justice.

“I also want to tell those jubilating that their jubilation will be short lived, while appealing to my teaming supporters to remain calm as their mandate is safe and secured and cannot be taken through any mischievous means”

“However, our legal team is already working on appealing the judgment and I assure all that justice will prevail.”

Appeal CourtDino MelayeKogi WestSam AdeyemiTribunal
Share
Subscribe to our newsletter
Sign up here to get the latest news, updates and special offers delivered directly to your inbox.
You can unsubscribe at any time