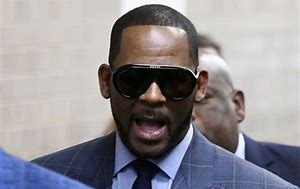 R &B star R. Kelly pleaded not guilty Friday to charges he sexually exploited young women and girls who attended his concerts, appearing in a U.S federal courtroom in Brooklyn packed with his supporters.

The entertainment star was denied bail, according to the U.S. attorney’s office in the Eastern District of New York.

Kelly was arraigned on a second federal indictment accusing him of being the leader of a “racketeering enterprise” that recruited women and girls for illegal sexual encounters with him, including transporting them across state lines.

NBC posted video of Kelly arriving at New Jersey’s Teterboro Airport. Wearing a tan prison shirt and orange shoes, the R&B star had his hands cuffed in front of him and shuffled along the tarmac as an officer escorted him to a waiting pickup truck.

Kelly is charged in a five-count indictment with racketeering, sexual exploitation of children, kidnapping, forced labor and Mann Act violations involving the coercion and transportation of women and girls in interstate commerce to engage in illegal sexual activity, according to the U.S. Attorney’s office.

Kelly has been locked up in Chicago since July 11 on another federal indictment by the Northern District of Illinois on similar sex-crime charges, including possession and production of child pornography.

Kelly has already pleaded not guilty to the federal charges in Illinois. He was denied bond and was locked up in the Metropolitan Correctional Center in Chicago until he was taken to New York.

R.Kelly
Share
Subscribe to our newsletter
Sign up here to get the latest news, updates and special offers delivered directly to your inbox.
You can unsubscribe at any time

Venezuela says ‘ready for battle’ with U.S over Trump’s blockade