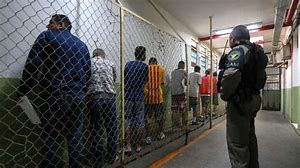 At least 52 prisoners were killed by other inmates during clashes between organized crime groups at the Altamira prison in northern Brazil on Monday, according to prison officials.

Para state prison authorities said 16 of the victims were decapitated while others were asphyxiated.

The count of victims potentially could rise when authorities have searched all areas involved, state prisons chief Jarbas Vasconcelos said at a news conference.

Prison authorities said a fight erupted around 7 a.m., between the Rio de Janeiro-based Comando Vermelho and another group, Comando Classe A.

Vasconcelos said the fire had spread rapidly, with inmates held in old container units that had been adapted for the prison while another building is under construction.

The fire prevented police forces from entering the building for about five hours, he said.

“It was a targeted attack. The aim was to show that it was a settling of accounts between the two groups, not a protest or rebellion against the prison system,” Vasconcelos said.

Authorities have not found any firearms following the riot, only makeshift knives.

Prison authorities said they were still trying to determine who were the leaders behind Monday’s attack, and those men will be transferred to federal prisons.

Brazil prison
Share
Subscribe to our newsletter
Sign up here to get the latest news, updates and special offers delivered directly to your inbox.
You can unsubscribe at any time

We’re against whoever’s on Israel’s side, says Erdogan

No secret accounts in NNPC – Kyari