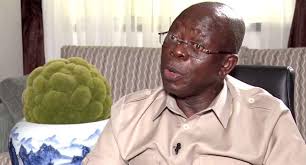 Share
The National Chairman of the All Progressives Congress (APC), Adams Oshiomhole on Wednesday that monies from staff pension deductions are not meant to be used for budget deficit by the Federal and State governments.
” It is meant to address the critical issues of the masses who contributed the money, he said during the opening ceremony of the Presidential Policy Retreat at the Council Chamber of the State House, Abuja.
On corruption, he urged the government to effectively plug leakages with all the Ministries Departments and Agencies reviewing ‘how’s to achieve it.
The former labour leader also recommended long term national economic plan to replace the current Economic Growth and Recovery Plan.
Those at the retreat included Vice President Yemi Osinbajo, Secretary to the Government of the Federation, Boss Mustapha, Aliko Dangote, Jim Ovia and former Prime Minister of Ethiopia.
State governors in attendance were Kebbi, Atiku Bagudu, Plateau, Simon Lalong, Kano, Abdullahi Ganduje, Kaduna, El-Rufai, Kogi, Yayaha Bello, Imo, Emeka Ihedioha, Bauchi, Bala Mohammed, Ekiti, Kayode Fayemi, Edo, Godwin Obaseki, Borno, Babagana Zulum and Lagos, Babajide Sanwoolu.
Details later..
Pension
Share
Subscribe to our newsletter
Sign up here to get the latest news, updates and special offers delivered directly to your inbox.
You can unsubscribe at any time

6 Things to know about Sadiya Farouq, Buhari’s nominee for minister