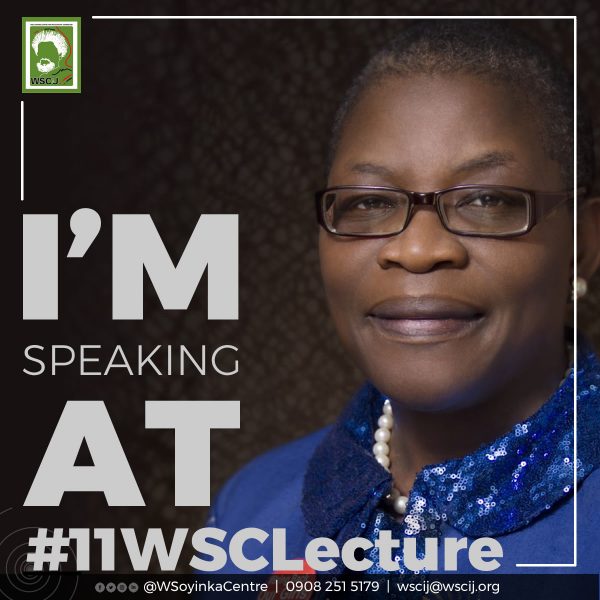 Mrs. Ezekwesili will be joined by other leading scholars, representatives of civil societies, leaders of industries, and students at this year’s event with the theme ‘Rethinking credible elections, accountable democracy and good governance in Nigeria.’

The lecture, which is held in commemoration of the 85th birthday of the Nobel laureate, Wole Soyinka, will take place at the MUSON Centre, Onikan, Lagos Island, Lagos.

The panel will discuss the urgent need to reconsider Nigeria’s election process in view of its complexities, how to make sure that governance becomes accountable and propound ways to make the people emerge as the greatest beneficiaries of democracy in Nigeria, even as it considers the critical role of the media in the mix. The meeting is strategic as it hopes to set the tone for the new executive government sworn in on May 29th and the parliament as it resumes with its new leadership on July 2nd.

Held first in 2008, the Wole Soyinka Centre Media Lecture Series is an annual event of the Wole Soyinka Centre for Investigative Journalism (WSCIJ). The Centre organises the lecture to raise debate on critical issues affecting Nigeria. The event has since 2009 held on 13 July, to commemorate the birthday of Africa’s first Nobel Laureate in Literature and Grand Patron of the WSCIJ, Wole Soyinka.

Admittance to the event is open to journalists, members of security agencies, the judiciary, members of political parties, policy makers, representatives of pressure groups, leaders of non-governmental organisations, members of the diplomatic corps, lawyers, students and other interested members of the public, according to Motunrayo Alaka, Coordinator, WSCIJ.

Wole Soyinka
Share
Subscribe to our newsletter
Sign up here to get the latest news, updates and special offers delivered directly to your inbox.
You can unsubscribe at any time

The legends of Aso Rock