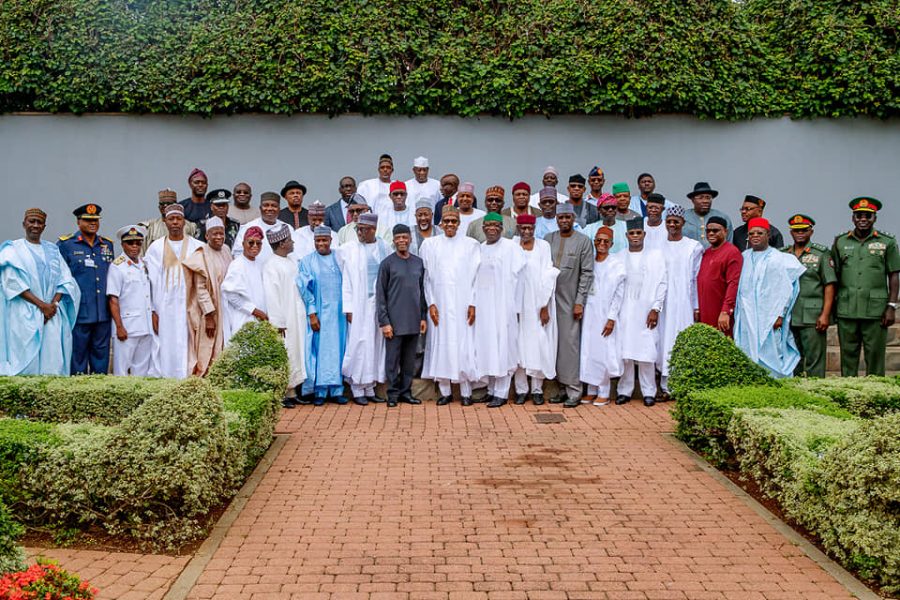 The governors of the 36 states of the federation are yet to decide on state and local government police because the financial muscle of each state differs.

This is even as they have resolved to decide on quick wins to address the various security challenges across the country at the next National Economic Council (NEC).

The Chairman of the Nigerian Governors Forum (NGF) and Ekiti State Governor, Kayode Fayemi disclosed this to State House Correspondents after an expanded security council meeting presided over by President Muhammadu Buhari.

President Buhari had during the submission of the report of the Presidential Panel on the Reform of the Special Anti-Robbery Squad (SARS) headed by Tony Ojukwu, Executive Secretary, National Human Rights Commission (NHRC), approved a three-man panel to work out modalities for the implementation of the report within three months.

The panel recommendations included: “Significant improvement in the funding, kitting and facilities of the Nigeria Police Force; Strengthening Information and Communication Technology of the Force; Establishment of State and local government Police;  and Institutionalizing a Special Investigation Panel to annually hear and determine complaints on alleged human rights violations against operations of the Nigeria Police Force.

Others are “Strengthening the Police Rapid Response Complaints Unit of the Nigeria Police and other internal complaints mechanisms of the Force to make them more responsive; Renaming the Special Anti-Robbery Squad (SARS) to Anti-Robbery Section (ARS) which was its original name and to make the section operate under the intelligence arm of the Police from the divisional, area command, state command, zonal command up to the Force Headquarters level. This wil also remove the stigma presently associated with the name SARS; and Ensuring the ARS limits itself to tackling armed robbery while other intelligence and operational units are strengthened to perform their various special tasks.”

According to Fayemi, who briefed alongside his colleagues from Ebonyi, David Umahi. Kebbi, Atiku Bagudu, Delta, Ifeanyi Okowa, Ondo, Rotimi Akeredolu, Plateau, Simon Lalong and Borno, Babagana Zulum, said while some state governors had disclosed their ability to support state and local government police, others are still battling with the challenge of paying existing workers salaries.

He said: “On whether state governors should be involved in state policing, the position of NGF on that is that we have not taken position because experiences vary. There are governors and states where their experience does not necessarily lean itself to more evolved policing to the states. There are also states where there are agitations for it, there are governors who have the views that that will work better in such states. And of course there are the economic issues relating to that. So we have the capacity at the state level  to fund state policing, those are all issues that will come in play when we get to the national economic council meeting that has been called. Particularly because there is a committee that is looking into it after the submission of the report on SARS. So, we will take all of these together.”

The NGF Chairman said they briefed the President on the security situations in their domains and assured him that they are ready to join forces with the him to end the security challenges in the country.

He said: “The meeting was at our instance as governors of the 36 states collectively. It has to do with the security situation in the country, our concerns about the what’s going on all across the nation.

Governors of Nigeria
Share
Subscribe to our newsletter
Sign up here to get the latest news, updates and special offers delivered directly to your inbox.
You can unsubscribe at any time