UK PM Theresa May announces resignation, will quit on June 7 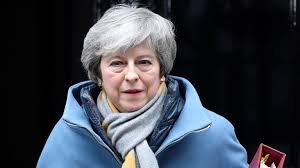 Share
British Prime Minister Theresa May confirmed her resignation in a solemn address given outside her former residence at No. 10 Downing street Friday in a long-awaited move.

The process for electing a new leader should begin next week May said, after confirming that she had informed the Queen of her decision to step down while expressing regret that she had failed to secure a Brexit deal.

“I will resign as leader of the Conservative and Unionist party on Friday, 7 June so that a successor can be chosen,” May said in front of the steps of 10 Downing Street.

May will continue to serve as the British leader until the process of electing a new leader is completed.

Reports circulated throughout the week that the Prime Minister would resign Friday, after repeated failures to secure a Brexit deal that would pass through the British Parliament while simultaneously appeasing exasperated EU negotiators in Brussels.

A defiant May called for her successor to “make the United Kingdom a country that truly works for everyone,” adding that she was “proud of the work we have completed over the last three years.”

“Our politics may be under strain, but there is so much that is good about this country,” May added, pleading for unity during the difficult times ahead.

BrexitTheresa May
Share
Subscribe to our newsletter
Sign up here to get the latest news, updates and special offers delivered directly to your inbox.
You can unsubscribe at any time

We Won’t Back Down, We’ll Re-Strategize, Says New IGP