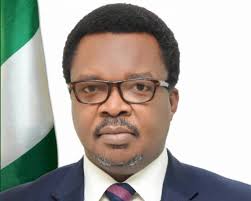 The sheer magnitude of his antecedents, together with training, work exposure, experience and discipline, attests to the fact that Mr. Chiedu Ugbo had long been prepared to occupy the driver’s seat at the Niger Delta Power Holding Company (NDPHC). Samplers: he was the Senior Special Assistant to President Muhammadu Buhari on Power Privatisation in the Office of the Vice President.  He was also the acting Head of the Advisory Power Team in the Office of the Vice President.

In a sure-footed manner that is reminiscent of the gravitas of astute management gurus in the command rooms of successful organisations and companies, Ugbo, who has been a lawyer for close to three decades, has consistently taken the NDPHC up some notches at critical intersections of developments and great accomplishments.

Through the process of deliberate and focused re-engineering of the company’s administrative infrastructure and motion for effective pursuit of set-goals, the electric energy law specialist has, acting in concert with his management team, succeeded in expanding the frontiers of NDPHC’s influence in the power subsector. His extensive experience in electricity industry reform, power project documentation and privatization, has come in handy in his current exertions.

For a technocrat who had the privilege of serving as an embedded consultant to the Bureau of Public Enterprises (BPE) where he was actively involved in electric power reforms and in negotiating and concluding several successful privatization transactions, the philosophy of vigorously stimulating the development of the power sector becomes emblematic of his leadership policy.

This management disposition has a historical antecedent to it: he had also acted as a counsel in the transaction advisory team of the BPE where he actively participated in and actually coordinated the legal work stream for the privatization of 20 successor electricity companies that were created out of the former Power Holding Company of Nigeria Limited (PHCN).

And, perhaps, what highly recommended him for his appointment as the MD/CEO of NDPHC, was his role in the corporate restructuring of the company and the privatization of the electric power plants and assets held by the company.  But more significantly is the fact that he had a reputation or work experience that recommended him to the Federal Government of Nigeria: his engagement under the USAI Power Africa Transaction and Reform Programme as an embedded adviser to Nigerian Bulk Electricity Trading Plc (NBET) where he provided legal support on electric power contracts including power purchase agreements for different fuel sources and the related credit support documentation.

The totality of Ugbo’s persona and imprimatur in the management trajectory at the NDPHC is the number of power projects that have been built on his watch. A cursory look at the profile of achievements clearly indicates a management epoch that is luminous. It is further confirmatory of the fact that Ugbo is not a run-off-the-mill MD/CEO.

The NDPHC has also flagged off several other projects across the nation to improve supply including the construction of a 330 kilovolt (kv) transmission substation worth N5.49bn in Lafia, Nasarawa state.  In Yola, the company constructed and handed over 16 injection distribution sub-stations to Yola DisCo to further boost electricity supply to Nigerians in the North-East zone. The sixteen distribution substations were parts of the 25 power distribution projects embarked upon in the northeast zone.  According to the NDPHC, the projects were aimed at addressing economic challenges and poverty in the zone.

What made the intervention imperative was the devastation caused by the Boko Haram insurgency.  About N11billion electricity infrastructure, especially distribution and transmission networks in the region, was destroyed, thus disrupting economic activities and livelihood of the populace. Indeed, NDPHC and other agencies had targeted total overhaul and expansion of power and other infrastructure in the zone.

Untiring, Ugbo is reportedly galvanizing and channeling budgetary appropriations to infrastructure development countrywide. The company is being guided to target the area of expanding power infrastructure, including renewable energy to mitigate key challenges. Ugbo had reportedly stressed the need to expand distribution infrastructure in Nigeria, saying it would reduce the burden of “stranded” power.

He clarified, for instance, that nine of the power projects handled by the NIPP were initiated under the President Muhammadu Buhari administration.  According to him, three projects were completed each in Adamawa, and Bauchi states, while the last one being constructed is located at Gujab and Gulani LGAs of Yobe State. Similarly, he said NIPP had earlier built 16 units of 7.5MVA 33KV injection substations, and had handed them over to the distribution company to improve customer experience in the region.

States that benefited from the construction of substations, according to him, included Borno, Adamawa, Gombe, Taraba, Yobe and Bauchi States all in the northeast zone.  The NDPHC has the potentiality of delivery countrywide projects in strategic interventions to expand power facilities. According to him, “Everybody wants NDPHC to do more. That shows the level of confidence they have in us and I want to say that we have done well in terms of projects delivery. We have the capacity to do more.”

With NDPHC firmly on Ugbo’s shoulders, Nigerians and the Federal Government that appointed him can rest assured that the company has the right management to drive the process of fulfilling its mandates, including supply and delivery of transformers and distribution of materials required for reconstruction and rehabilitation of vandalized power facilities especially in places where insurgency had devastated hitherto power facilities.

In rounding off, it is significant to place on record that the NDPHC has completed over 40 projects in the last two years. The management team under Ugbo deserves commendation. Regardless of the achievements so far, it is imperative that the management on Ugbo’s watch does not rest yet on its oars as it is not yet Uhuru in the building of countrywide power infrastructure that can be deployed to transmit and/or supply power as it is incrementally available.