Finally, Ngige inaugurates NSITF board at the Villa 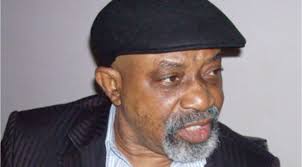 At last Minister of Labour and Employment, Chris Ngige, inaugurated the Board of the Nigeria Social Insurance Trust Fund (NSITF), at the State House Conference Centre, Presidential Villa, Abuja.

The board is headed by Austin Enajemo-Isire, a Chartered Accountant, professional Insurance Executive, and Banker.

Despite the disputes to the Isire-led Board, the Nigeria Labour Congress (NLC) was represented at the inauguration ceremony by Comrades Waheed Adeyanju and Ibrahim Khaleel.

The secretary of the committee is Mrs Ijeoma Okoronkwo.

President Muhammadu Buhari had backed the Minister of Labour and Employment, regarding the replacement of ex-labour leader, Frank Kokori, as head of the NSITF with Enajemo-Isire.

Special Adviser to the President on Media and Publicity, Femi Adesina, in a statement described the move as part of the special work plan approved for the minister by President Buhari.

The Nigeria Labour Congress president, Ayuba Wabba, had been engaged in a war of words with Ngige over the displacement of Kokori.

The dispute degenerated to disruption of an earlier scheduled inauguration ceremony at the Minister’s office and the picketing of his residence by members of the NLC.

In his remarks, Ngige recalled the fraud uncovered under the past NSITF Board and being investigated by anti -graft agencies, hence the need to appoint a new set of board members.

He charged the new appointees to leave the day-to-day running of NSITF to the Executive Directors, and not award contracts or review upwards their remunerations and allowances by themselves.

He stated that nonetheless, the Board should always  be made aware of whatever the Tenders Board of the NSITF was doing, in order to enhance checks and balances in the system.

The Minister commended the current management of the NSITF, led by Barrister Adebayo Somefun, for improving the fortunes of the Fund and implementing its statutory mandate, but enjoined it to work in harmony with the new Board to continually improve staff welfare and other indices needed to make the Fund function optimally.

Ngige said: “Though this Board is being inaugurated much later than its contemporaries, the NSITF is however better set to welcome a new Board than it was at the time when the other Boards of the Ministry were inaugurated. As you all may be aware, the last Board and Management of the NSITF left negative trails inimical to development and progress for both the human and infrastructural components of the Agency.

“The criminal investigations by the Economic and Financial Crime Commission (EFCC) and the subsequent Administrative Panel of Enquiry investigations revealed financial atrocities that would go down the annals of history of the NSITF as shameful and monstrous.  At a time, the national dailies and social media were agog with the news of corruption and deep sleaze by some members of the previous Board in collusion with some top Management Staffof the Agency who aided and abetted the looting of both Government and Private Sector Funds of about N48 Billion from the N62 Billion contributions between 2012 – 2015 of the NSITF.

“This resulted in about four Board Members including the last Chairman being arraigned and charged to court by the EFCC. Some monies have been paid back to Government Treasury and about 37 Houses are now under forfeiture.  The Administrative Panel report also indicted some Board members and NSITF Management Officers. The affected Officers have now been shown the way out, and many more indicted Officers by the Auditor General’s Periodic Report on the NSITF will soon be made to refund the monies illegally taken from the Fund. The Auditor General of the Federation (AUGF) had to be requested by us in 2017 when it became clear that there was no Audited Account for the place for five (5) years, past to undertake the Constitutional periodic check.

The Administrative Panel also made some far reaching recommendations towards making the NSITF financially viable and plugging all the loopholes exploited by some members of the last Board. Permit me to say that we have implemented a lot of the recommendations in order to restructure and reposition the Agency especially strengthening the Financial and Audit points of the Fund through some strategic staff deployment. At least N5 Billion cannot now varnish in a day without Audit trial or voucher!! The Legal Department was also strengthened for their functions. The remainder of the recommendation will be passed on to the Board and Management for their immediate implementation. Meanwhile, areas of financial haemorrhage which made the Fund financially anaemic such as uncoordinated appointment of Collection Agents and indiscriminate investments as well as multiplicity of Bank Accounts have been also tackled. The Single Treasury Account (TSA) is in place and has made sure that the issue of multiplicity of accounts and investment are handled and undertaken wisely. The Bureau of Public Procurement (BPP) has vetted and appointed very few Consultants for collection for a period of time.

“With all these in place, enough funds are now available to attend to staff salaries, allowances, and running costs of the Agency unlike years 2015/16 when the Fund was living from “hand to mouth”. The Executive Directors appointed in 2017 have also adjusted and had within the time period been able to lift the Fund to a better level. Government has also started paying up their Contribution since 2017/18 and 2019, as they were initially reluctant to do so because of the massive looting that took place in the Fund in 2012 – 2015. In all, it was difficult to put up a Board without sanitizing the place.”

“As at today, the Fund is in arrears in her Audited accounts – the period is 2012 – 2018, a period of seven years. We need these Audited Accounts as soon as possible, to enable us do our Annual reports to Mr. President.

“More work will also be needed in the area of resolving the issue of unremitted PAYE Tax, which were deducted from staff but not remitted to the State Tax Boards resulting in the sealing up of many Branch offices, e.g. Port Harcourt, Owerri, etc.”

Ngige enjoined the members to ensure proper conduct of the affairs of the Agency to “restore the confidence of the Nigerian Public in the administration of the fund collected for the execution of the Employees’ Compensation Act (ECA), 2010 which is now the major mandate of the Fund, especially in view of the fact that it is the funds contributed by the Public and Private Sectors to execute this mandate. These contributions are strictly speaking Employers’ Fund which they contributed to purchase an Insurance package for their Employees. In both would-be beneficiaries, i.e. the Employees and employers should be concerned about the monies used in running the operations of the Fund.”

He urged them to be mindful of the fact that their function and operations are regulated by various Federal Government circulars. “You are to execute the general policy formulation for the implementation of the ECA by the Management team of the NSITF. Be mindful of the general principle which states that nominal board members are not to be involved in the day – to – day running of the Fund,” he urged.

In terms of remuneration, Ngige said the Board remuneration has been clearly spelt out as to what to be paid for Board Meetings and for travels both within and outside the country while Salaries and Emoluments of staff members fixed by the Board but subject to the ratification by the Supervising Ministry and subsequent confirmation of the National Salaries, Income and Wages Commission. “Therefore the Board should not step into the temptation of fixing remunerations and special allowancesfor themselves like the former Board did,” he warned.

He urged that investments of the Fund are to be streamlined and properly compartmentalised in line with due process. Ngige also urged them to with urgency “retrieve all abandoned building assets in the real estate sector that are scattered all over the countryat Lagos, Abuja, Port Harcourt, Enugu etc with the whereabouts of some of the title documents not known. Other investments like the Trust Fund Pensions Ltd– our Pension Fund Administration (PFA) Company which was originally created 100% from NSITF assets and which the NSITF presently has a majority shareholding of 42% of which some “greedy and overzealous shareholders”  have been trying to “poach” for sometime now  without success should be religiously guided. If anything, NSITF should acquire more equity in the company being a profitable investment. The company is a prized investment as it’s the only biggest Revenue yielding investment for the NSITFas of today.”