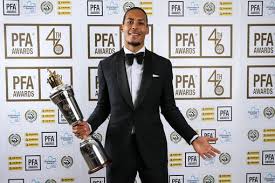 Virgil van Dijk has won the PFA Player of the Year award after a stunning campaign for Liverpool football club this season.

The Dutch centre half pipped Raheem Sterling to the gong, with the England forward also among the favourites tipped to receive the award, which was announced on Sunday evening.

Having played every league game for the club this season, Van Dijk is the undisputed leader in Liverpool’s defence, producing consistently commanding performances for a side that have the best defensive record in the division.

Saturday’s 5-0 win over Huddersfield was Jurgen Klopp’s side’s 18th clean sheet of the season, a league high, while in their 38 matches this campaign they have shipped in a meager 20 goals.

He is yet to be dribbled past this season, something no other player in Europe’s top five leagues has achieved (minimum 2,000 minutes), while he also been dispossessed only once throughout the entire season. What makes the stat all the more remarkable is that Van Dijk has only been issued with one yellow card and committed just 12 fouls this term.

Liverpool manager Jürgen Klopp sent a special message to Virgil van Dijk as the centre-back was named the 2018-19 PFA Players’ Player of the Year on Sunday night.

I’m really proud it’s the second time in a row I can speak about a wonderful player who won the award for Player of the Season: Virgil van Dijk,” said Klopp.

“Who would have thought that when he started back in Holland? I think not everybody saw immediately what kind of player hides in this giant body.

“But now the whole world is aware of that and I’m really happy I can be a little bit around that development. I would love to think it’s because of me! But obviously it’s not, he was already the player he is now when we bought him from Southampton.

“It all worked out. From the first moment I was so excited about the opportunity to work together and now you are the man – at least for this season!”

What we know about Aisha Abba Kyari’s appointment at NSIA