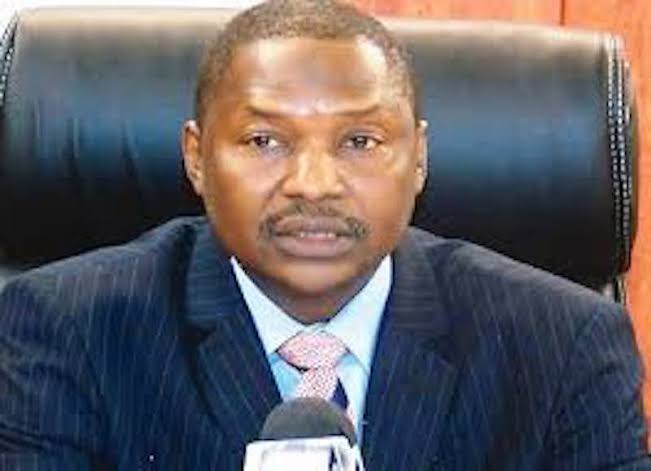 Share
The Attorney General of the Federation (AGF) and Minister of Justice, Abubakar Malami, has refuted the claims by the Peoples Democratic Party (PDP), that he was involved in a plot to cause a constitutional crisis, by pressuring the Supreme Court to reverse its judgement on the Rivers State All Progressive Congress (APC) primaries.
Malami further accused the PDP of “taking freedom of speech too far” with the allegations.
Responding to questions from State House Correspondents, on Wednesday in Abuja, on the outcome of the Federal Executive Council (FEC) meeting, he said: “unless otherwise proven in court that I am involved in the act, it will remain an accusation.
“But for me, I think it is freedom of speech that has been taken too far.”
PDP had recently raised alarm that Malami was spearheading an APC leaders’ plot to mount pressure on the Acting Chief Justice of Nigeria (CJN), Justice Tanko Mohammed, to reverse the February 12, 2019, final judgment of the Supreme Court.
The court had upheld the verdict of the trial court that excluded the APC from participating in the National Assembly, Governorship and State Assembly Elections in Rivers State, by nullifying the party primaries in the state.
The PDP also added that it had information of “how the Minister of Transportation, Rotimi Amaechi, had been going around in Rivers State, giving assurances that he has the ears of the Supreme Court under the leadership of Acting CJN.”
According to the party, Amaechi also assured that the Supreme Court will reverse its final judgment on APC primaries and create the way for fresh elections in Rivers State, in which the APC will be allowed to participate.
Abubakar MalamiAGFAPCCJNFECJustice Tanko MohammedMinister of JusticePDP
Share
Subscribe to our newsletter
Sign up here to get the latest news, updates and special offers delivered directly to your inbox.
You can unsubscribe at any time