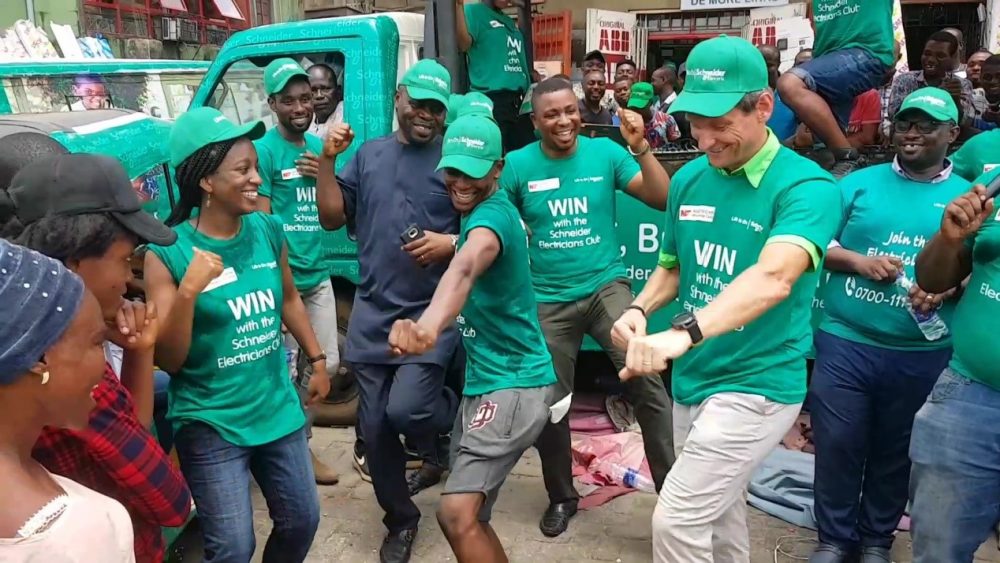 Lagos, In a bid to ensure electrical safety and installation of genuine equipment, Schneider Electric and its partners have embarked on a tour of Lagos Island and Oshodi electrical markets.

The company which began a two-day roadshow on Wednesday, said the initiative was aimed at mass enlightenment of the public on safety.

Among the stakeholders on the tour are electricians, distributors, retailers, and partners of Schneider Electric with each highlighting the benefits of patronizing genuine products.

Members of the Schneider Electricians Club received incentives which included free technical training, access to discounts, and earned loyalty points which can be redeemed as gift items as part of the company’s strategy to promote original products and boost electricians’ loyalty.

The Managing Director, Schneider Electric Anglophone West Africa, Mr Christophe Begat, said the company partnered with other companies to sensitise the public on the use of original appliances to prevent disasters.

“For Schneider Electric, safety is paramount and that is why we partner with companies that guarantee the authenticity of the products that are sold.

“We are happy to collaborate with them in sensitizing the public about the importance of safe practices and patronizing original appliances,’’ he said.

A recent statistics from the Nigerian Electricity Management Services Agency show that 190 people were victims of 146 electrical accidents in 2017. Of these, 113 died in 95 accidents while 77 others sustained injuries in another 51 accidents.

Schneider Electric, Nigerchin, and other partners believe purchase and use of genuine electrical appliances would reduce casualty level from electrical accidents nationwide.

Representatives of the companies said users must insist on buying original to avoid untimely and needless deaths and disasters.

“It may be costly but it is better to buy original than cheaper substandard appliances that will put the house on fire,’’ one of the officials, who identified himself as Goddy Joseph, said.(NAN)

Don't buy substandard appliancesSchneider Electric warns
Share
Subscribe to our newsletter
Sign up here to get the latest news, updates and special offers delivered directly to your inbox.
You can unsubscribe at any time