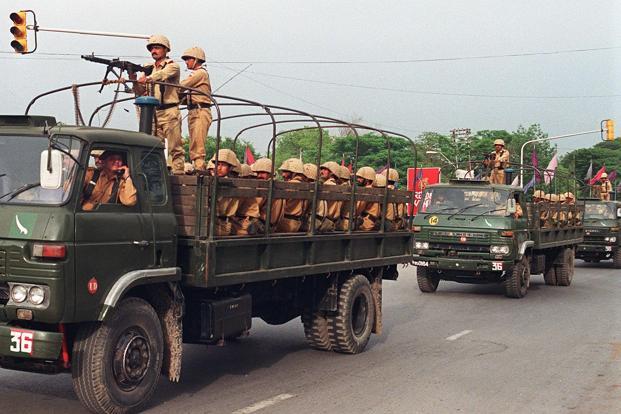 Pakistan says Indian aircraft crossed into its territory and dropped bombs on Tuesday without causing casualties in the latest escalation between the nuclear-armed rivals since a deadly attack on Indian troops in the disputed Kashmir region sent tensions soaring.

Maj. Gen Asif Ghafoor, a military spokesman, said the Indian “aircrafts” crossed into the Pakistan-controlled Muzafarabad sector of Kashmir, which is split between the two countries but claimed by each in its entirety. He said Pakistan scrambled fighters and the Indian jets “released payload in haste,” near Balakot, on the edge of Pakistani-ruled Kashmir.

Balakot police chief Saghir Hussain Shah told The Associated Press that he had sent teams to the area, which he described as a mostly deserted wooded area.

“There are no casualties, there are no damages on the ground because of the dropping of the bombs,” he said.

There has been no immediate comment from India. India’s Cabinet Committee on Security, presided over by Prime Minister Narendra Modi, was to meet Tuesday, New Delhi Television reported.

Kashmir has been the cause of two previous wars between the uneasy neighbors. They fought a third war in 1979 over East Pakistan, which gained its independence with the help of India and became Bangladesh.

Tensions have been high since the attack earlier this month. Pakistan has outlawed Jaish-e-Mohammed and seized its properties in south Punjab’s Bawahalpur area, including religious schools and mosques. India has demanded that Jaish-e-Mohammad leader, Azhar Masood, be listed as a terrorist by the United Nations, but has been stymied by China.

“We are a responsible nation and our forces are capable to defend each every inch of our motherland,” he told a local television channel.

IndiaPakistan
Share
Subscribe to our newsletter
Sign up here to get the latest news, updates and special offers delivered directly to your inbox.
You can unsubscribe at any time