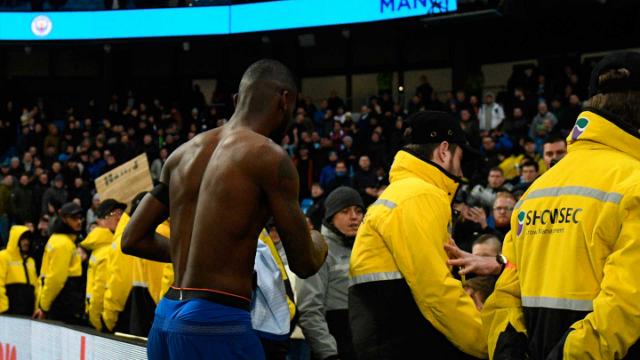 Antonio Rudiger was involved in a heated exchange with Chelsea supporter as he gave his match shirt to a fan as he went to apologise for an embarrassing 6-0 defeat to league leaders Manchester City.

The Blues defender was the last of many players including Eden Hazard, David Luiz, Cesar Azpilicueta and Marcos Alonso to go to apologise to the travelling support on Sunday.

Stewards at the Etihad Stadium stepped in to pull away from the supporter, who was shouting at the Chelsea centre back, as he handed his shirt over.

Rudiger confronted the angry fan by saying: “I’ve come over to say sorry – stand in front of me if you‘ve something to say.”

The scene, which has been both filmed and pictured, came after Chelsea suffered their heaviest defeat for 28 years and as they drop to sixth place, the lowest position that they have yet registered this season.

The majority of the away section chanted “Rudi, Rudi, Rudi” after seeing his passion in what was an emotional moment for those at the club.

Chelsea’s vice-captain Cesar Azpilicueta was one of the few to face the media after the painful result, and he used the opportunity to apologise to fans.

“It is one of the worst nights in my career. It is difficult to explain what happened,” he told  Sky Sports .

“The first five or six minutes went well but that is not enough. It is very frustrating and disappointing. We are conceding a lot of goals and we cannot accept that.

Chelsea
Share
Subscribe to our newsletter
Sign up here to get the latest news, updates and special offers delivered directly to your inbox.
You can unsubscribe at any time