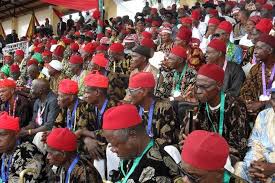 The Ohaneze Ndigbo has apologized to President Muhammadu Buhari, over the comment credited to its  President-General, Chief Nnia Nwodo, endorsing the presidential candidate of the Peoples Democratic Party (PDP), Atiku Abubakar.

The group led by its embattled Secretary-General, Uche Okwukwu, told Buhari that  Nwodo is on an indefinite suspension pending the outcome of a nine-man panel headed by Mr. Richard Ozobu to investigate acts of misconduct and abuse of office as well as bringing Ohaneze to public disgrace, submits its report.

Ohaneze Ndigbo, Association of Eze Ndigbo in 19 northern states, the World Igbo Congress and the World Igbo Union, were in the presidential villa on a courtesy visit.

According to Okwukwu, the indefinite suspension of Nwodo bordered on the endorsement of Atiku Abubakar and Peter Obi ahead of the presidential election on February 16th.

Nwodo had on behalf of the apex Igbo socio-cultural group in Nigeria,  at the Summit of Nigerian Leaders and Elders  with the theme: Elections: The Search for Credible Free and Elections,” jointly chaired by Pan-Niger Delta Forum (PANDEF) Pa Edwin Clark, and Professor Ango Abdullahi, the Convener of Northern Elders’ Forum (NEF), adopted Atiku as its presidential candidate for the February 16th elections.

According to Okwukwu, the Igbos identify with Buhari’s achievements of improving ease of doing business in the south east. He said the Igbos will vote massively for him and will resist any attempt to manipulate or rig the elections.

He said Buhari will win greater number of votes from the south east, urging him not to give up and let there be no sacred cow in the fight against corruption.

Buhari said He is impressed by the show of support from the regional body, which demonstrates unity in diversity, noting that diversity is our biggest asset that we must apply in the development of the nation.

The said the perpetrators of crime whether in security, economy and corruption are from all tribes and that his administration will not discriminate in its response.

He said he has identified key challenges for all regions and he will do his best to address them. 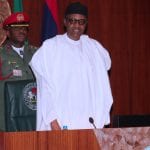